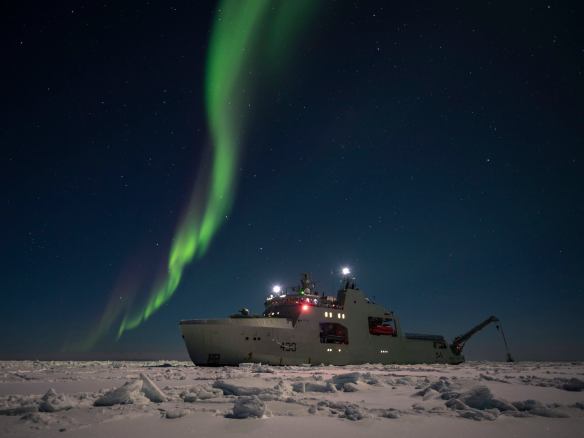 The Harry DeWolf class is an almost unique type of ship. Canada is building eight, six for their Navy and two for their Coast Guard. It is derived from the similar and perhaps slightly more capable Norwegian Coast Guard vessel Svalbard, which has made it to the North Pole and recently undertook a mission the Healy was unable to complete due to a machinery casualty.

They are classified as “Artic and Offshore Patrol Ships” or AOPS, rather than icebreakers, but they are clearly designed to operate in ice and are rated Polar Class 5 (Year-round operation in medium first-year ice, which may include old ice inclusions). In many ways they approximate the similarly sized and powered old Wind Class icebreakers. (2012 post on the class with updates in the comments here.)

Below are another photo and a couple of videos, but first the specs.