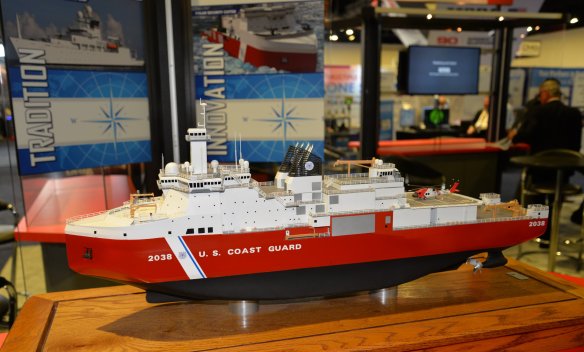 The Congressional Research Service has once again updated their look at the Polar Security Cutter (heavy icebreaker) program. (See the latest version here.) My last look at this evolving document was in regard to the August 31, 2021 revision.

I will reproduce the one page summary below but first I will point out what appears to be new. From page 29-32:

(a) SHORT TITLE.—This section may be cited as the ‘‘Great Lakes Winter Shipping Act
of 2021’’.

(A) IN GENERAL.—Not later than 1 year after the date of the enactment of this Act, the Comptroller General of the United States shall submit to the Committee on Commerce, Science, and Transportation of the Senate and the Committee on Transportation and Infrastructure of the House of Representatives a report on Coast Guard icebreaking in the Great Lakes.

(B) ELEMENTS.—The report required under subparagraph (A) shall—

(I) the economic impact related to vessel delays or cancellations associated with ice
coverage on the Great Lakes;

(II) the impact the standards proposed in paragraph (2) would have on Coast Guard operations in the Great Lakes if such standards were adopted;

(III) the fleet mix of medium ice breakers and icebreaking tugs necessary to meet the standards proposed in paragraph (2); and

(IV) the resources necessary to support the fleet described in subclause (III), including
billets for crew and operating costs; and

(ii) make recommendations to the Commandant for improvements to the Great Lakes icebreaking program, including with respect to facilitating shipping and meeting all Coast Guard mission needs.

(2) PROPOSED STANDARDS FOR ICEBREAKING OPERATIONS.—The proposed standards, the impact of the adoption of which is evaluated in subclauses (II) and (III) of paragraph (1)(B)(i), are the following:

(B) In a year in which the Great Lakes are not open to navigation as described in subparagraph (A) because of ice of a thickness that occurs on average only once every 10 years, ice-covered waterways in the Great Lakes shall be open to navigation at least 70 percent of the hours that vessels engaged in commercial service and ferries attempt to transit such ice-covered waterways.

(3) REPORT BY COMMANDANT.—Not later than 90 days after the date on which the Comptroller General submits the report under paragraph (1), the Commandant shall submit to the Committee on Commerce, Science, and Transportation of the Senate and the Committee on Transportation and Infrastructure of the House of Representatives a report that includes the following:

(A) A plan for Coast Guard implementation of any recommendation made by the Comptroller General under paragraph (1)(B)(ii) with which the Commandant concurs.

(C) A review of, and a proposed implementation plan for, the results of the fleet mix
analysis under paragraph (1)(B)(i)(III).

(D) Any proposed modifications to current Coast Guard Standards for icebreaking operations in the Great Lakes.

(4) PILOT PROGRAM.—During the 5 ice seasons following the date of enactment of this Act, the Coast Guard shall conduct a pilot program to determine the extent to which the current Coast Guard Great Lakes icebreaking cutter fleet can meet the proposed standards described in paragraph (2).

(c) DATA ON ICEBREAKING OPERATIONS IN THE GREAT LAKES.—

(1) IN GENERAL.—The Commandant shall collect, during ice season, archive, and
disseminate data on icebreaking operations and transits on ice-covered waterways in the Great Lakes of vessels engaged in commercial service and ferries.

(2) ELEMENTS.—Data collected, archived, and disseminated under paragraph (1) shall
include the following:

(A) Voyages by vessels engaged in commercial service and ferries to transit ice-covered waterways in the Great Lakes that are delayed or cancelled because of the nonavailability of a suitable icebreaking vessel.

(B) Voyages attempted by vessels engaged in commercial service and ferries to transit ice covered waterways in the Great Lakes that do not reach their intended destination because of the nonavailability of a suitable icebreaking vessel.

(C) The period of time that each vessel engaged in commercial service or ferry was delayed in getting underway or during a transit of ice-covered waterways in the Great Lakes due to the nonavailability of a suitable icebreaking vessel.

(E) The percentage of hours that Great Lakes ice-covered waterways were open to
navigation, as defined by this section, while vessels engaged in commercial service and
ferries at tempted to transit such waterways for each ice season after the date of enactment of this section.

(F) Relevant communications of each vessel engaged in commercial service or ferry with the Coast Guard or commercial icebreaking service providers with respect to
subparagraphs(A) through (D).

(3) VOLUNTARY REPORTING.—Any reporting by operators of commercial vessels
engaged in commercial service or ferries under this Act shall be voluntary.

(4) PUBLIC AVAILABILITY.—The Commandant shall make the data collected, archived
and disseminated under this subsection available to the public on a publicly accessible
internet website of the Coast Guard.

(5) CONSULTATION WITH INDUSTRY.—With respect to the Great Lakes icebreaking operations of the Coast Guard and the development of the data collected, archived, and disseminated under this subsection, the Commandant shall consult operators of vessel engaged in commercial service and ferries.

(A) VESSEL.—The term ‘‘vessel’’ has the meaning given such term in section 3 of title 1, United States Code.

(B) COMMERCIAL SERVICE.—The term ‘‘commercial service’’ has the meaning given
such term in section 2101(4) of title 46, United States Code.

(D) ICE-COVERED WATERWAY.—The term ‘ice-covered waterway’’ means any portion of the Great Lakes, as defined by subparagraph (C), in which vessels engaged in commercial service or ferries operate that is 70 percent or greater covered by ice, but does not include any waters adjacent to piers or docks for which commercial icebreaking services are available and adequate for the ice conditions.

(E) OPEN TO NAVIGATION.—The term ‘‘open to navigation’’ means navigable to the extent necessary to meet the reasonable demands of shipping, minimize delays to passenger ferries, extricate vessels and persons from danger, prevent damage due to flooding, and conduct other Coast Guard missions as required.

(F) REASONABLE DEMANDS OF SHIPPING.—The term ‘‘reasonable demands of shipping’’ means the safe movement of vessels engaged in commercial service and ferries transiting ice-covered waterways in the Great Lakes to their intended destination,
regardless of type of cargo.

(1) for fiscal year 2022, $350,000,000 shall be made available to the Commandant for the acquisition of a Great Lakes icebreaker at least as capable as Coast Guard Cutter Mackinaw (WLBB–30); and

(2) for fiscal year 2023, $20,000,000 shall be made available to the Commandant for the design and selection of icebreaking cutters for operation in the Great Lakes, the Northeastern United States, and the Arctic, as appropriate, that are at least as capable as the Coast Guard 140-foot icebreaking tugs.

(e) PROHIBITION ON CONTRACT OR USE OF FUNDS FOR DEVELOPMENT OF COMMON HULL DESIGN.—Section 8105 of the William M. (Mac) Thornberry National Defense Authorization Act for Fiscal Year 2021 (Public Law 116–283) is amended by striking subsection (b) and inserting the following:

‘‘(b) REPORT.—Not later than 90 days after the date of the enactment of this subsection, the Commandant shall submit to the Committee on Commerce, Science, and Transportation of the Senate and the Committee on Transportation and Infrastructure of the House of Representative a report on the operational benefits and limitations of a common hull design for icebreaking cutters for operation in the Great Lakes, the Northeastern United States, and the Arctic, as appropriate, that are at least as capable as the Coast Guard 140-foot icebreaking tugs.’’.

The committee directs the Secretary of Defense to submit a report to the congressional defense committees by March 1, 2022 on whether additional ice breaking vessels are  necessary in the Great Lakes region. The report must include an analysis on the necessity for ice breaking vessels in the St. Clair River. (Page 223)

Summary
The Coast Guard Polar Security Cutter (PSC) program is a program to acquire three new PSCs (i.e., heavy polar icebreakers), to be followed years from now by the acquisition of up to three new Arctic Security Cutters (ASCs) (i.e., medium polar icebreakers). The PSC program has received a total of $1,754.6 million (i.e., about $1.8 billion) in procurement funding through FY2021, including $300 million that was provided through the Navy’s shipbuilding account in FY2017 and FY2018. With the funding the program has received through FY2021, the first two PSCs are now fully funded.

The Coast Guard’s proposed FY2022 budget requests $170.0 million in procurement funding for the PSC program, which would be used for, among other things, procuring long leadtime materials (LLTM) for the third PSC.

On April 23, 2019, the Coast Guard-Navy Integrated Program Office for the PSC program awarded a $745.9 million fixed-price, incentive-firm contract for the detail design and construction (DD&C) of the first PSC to VT Halter Marine of Pascagoula, MS, a shipyard owned by Singapore Technologies (ST) Engineering. VT Halter was the leader of one of three industry teams that competed for the DD&C contract. The first PSC is scheduled to begin construction in 2021 and be delivered in 2024, though the DD&C contract includes financial incentives for earlier delivery.

The DD&C contract includes options for building the second and third PSCs. If these options are exercised, the total value of the contract would increase to $1,942.8 million (i.e., about $1.9 billion). The figures of $745.9 million and $1,942.8 million cover only the shipbuilder’s costs; they do not include the cost of government-furnished equipment (GFE), which is equipment for the ships that the government purchases and then provides to the shipbuilder for incorporation into the ship, post-delivery costs, costs for Navy-specific equipment, or government program-management costs.