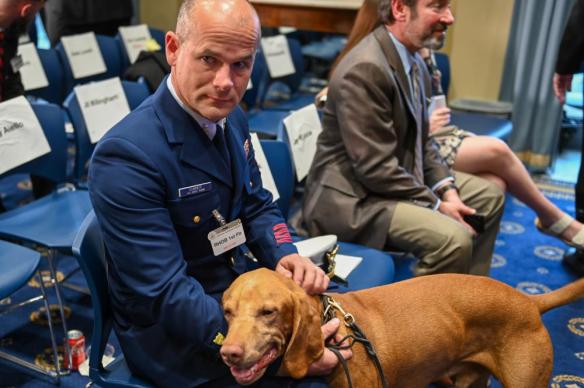 Had to pass this along. I note the dog is a Chief and the handler is a First Class, so the Dog out ranks the handler?

Members of Congress recognized and honored six animal heroes for their accomplishments in both war and peace at the second annual Animals in War and Peace Medal Ceremony.

The ceremony highlights America’s appreciation of the sacrifices and heroism of American animals who served the United States and advances the effort toward the creation of an annual process to nominate animals for the Medal of Bravery and Distinguished Service Medal.

Feco joined the Coast Guard in late 2014 and is stationed at the Marine Safety and Security Team San Francisco K-9 Unit where his main responsibility is explosives detection at the Ports of San Francisco and Oakland.

Feco has participated in 1,467 events. Notable events include:

The Coast Guard has 16 canine explosive detection teams around the country made up of one human handler and one working dog.