Below is an announcement from MyCG. I have added some photos.

Congratulations to the winners of the 2022 Hopley Yeaton Awards!

Named for legendary seafarer Capt. Hopley Yeaton, the first officer commissioned into the service, these annual awards recognize the individuals and crews who best exemplify what it means to be a Coast Guard cutterman.

The Douglas Munro Chapter of the Surface Navy Association announced this year’s recipients, who were selected from a highly competitive pool of nominees that a panel of 56 active duty and retired cuttermen reviewed.  By category, the winners include: 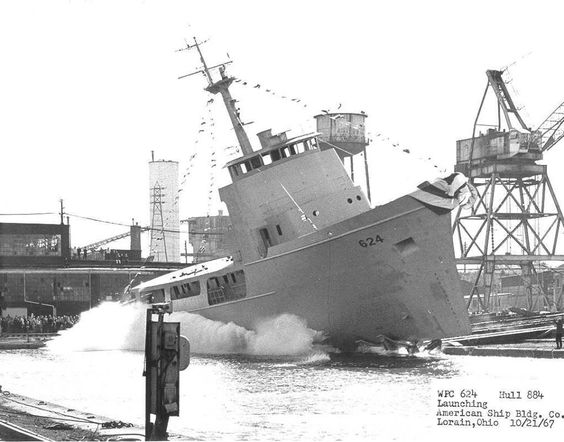 USCGC Dauntless being launched on 21 October 1967.

During Rim of the Pacific (RIMPAC) 2022, the world’s largest international maritime warfare exercises, Coast Guard Cutter Midgett became the first cutter to command two combined task forces. The crew completed 33 sea events there and responded to a fire aboard a Peruvian naval vessel, saving the ship, and rescuing/arranging treatment for two severely burned crew members. While deployed with the Navy’s 7thFleet, the Midgett also successfully operated in and around some of the world’s most politically sensitive areas, including the Malacca Straits and the South China Sea.

Coast Guard Cutter Glen Harris completed the first ever South Atlantic crossing (from Florida to Bahrain) by a fast response cutter (FRC) and the first three drug interdictions in the Middle East by a Coast Guard vessel. Its crew also saved the lives of 107 migrants on a submerged raft off the coast near Morrocco, conducted military exercises with allies in the region, and defended assets traveling through the Strait of Hormuz.

Battling freezing temperatures and gale force winds Lt. Michael Overstreet led the diverted Katmai Bay on a challenging search and rescue mission. His team got the stricken passenger vessel Huron in a side tow and safely back to the pier, while averting a major environmental disaster from jagged underwater rocks. Under his leadership, the crew successfully evacuated a patient needing immediate medical care in harrowing conditions after two boiler explosions severely limited the Katmai Bay’s heating system.

Acting as operations officer aboard the Charles Moulthrope for five months, Chief Petty Officer Collin Strange led planning for two large-scale international naval exercises, bolstering U.S. partnerships with the U.K., Oman, Pakistan, and the U.A.E. He also organized defense escorts through the Straits of Hormuz to protect strategic assets and counter malign Iranian activity, and led a team that collected video and evidence documenting unsafe maneuvers by Iran’s Navy in a near collision with coalition assets. In the Arabian Sea, he personally saved a ship-rider from choking, and demonstrated professionalism and technical prowess as a liaison aboard an Iraqi naval vessel during exercises with the Coast Guard, Navy, and Kuwaiti navy.

The awards will be presented at the SNA Conference awards luncheon on Jan. 11, 2023. For further details, see the ALCOAST 507/22 or email Lt. Luke Trautwein or Lt. Stephen Taylor.