Now that there are three National Security Cutters commissioned and  homeported in Alameda, we will soon see the first attempts at using multiple crews to man them, the “Crew Rotation Concept.” Four crews will man three ships. Additional facilities for the fourth crew are being built on Coast Guard Island.

There is a discussion of the Navy’s current plans for doing something similar here, along with comments on their previous experience with the concept.

We have had previous posts on the concept and they always prompted a lively discussion:

The Navy’s reason for wanting to “swap” crews centers on a desire to avoid the dead time inherent in the long transit to their operating areas. In the Coast Guard case it is more a desire to reduce AC&I costs. Providing more op-days per hull even if the day to day operating cost per op-day are almost certain to be higher.

END_OF_DOCUMENT_TOKEN_TO_BE_REPLACED

If you are a regular reader of the posts here, you know that I have not been a fan of the “Crew Rotation Concept” that is supposed to make up for the fact that we are only building eight NSC to replace twelve Hamilton Class WHECs by home-porting three ships together and providing four crews. (Previous posts on this here and here.)

One of my criticism has been that if multiple crewing is such a good idea, we should be trying it on smaller, simpler ships first. This got me thinking about how it might work for the Fast Response Cutters (FRC), and I’ve come up with a bit different concept. It may offer some advantages and there may be good reasons to try it 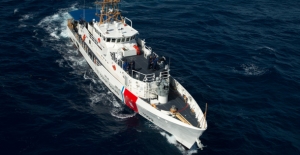