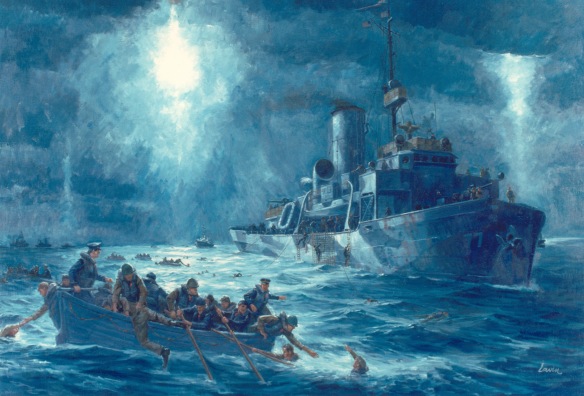 The following is based on Samuel Eliot Morison’s History of the United States Naval Operations in World War II, Volume I, The Battle of the Atlantic, 1939-1943, pp 330-334 and information from Uboat.net.

The current list of names selected for the Webber class WPCs includes the names of Charles Walter David Jr. and most recently Forrest O. Rednour. These two men are representative of about two dozen rescue swimmers who risk their lives to rescue survivors from the chartered US Army Transport Dorchester. torpedoed on February 3, 1943, 74 years ago.

These men did the best they could to mitigate a disaster, but it was still a disaster. This was the largest loss of personnel on a US flag merchant vessel during WWII.

SG-19 was a small convoy bound from St Johns Newfoundland to Greenland, three ships, two merchantmen and the 5,252 ton Army transport Dorchester, with about 1000 tons of cargo, a crew of 130 men, an armed guard of 23, and 751 passengers, mostly Army reinforcements, and among them some 23 Coast Guard personnel, for a total of 904, of these only 229 would survive. As might be expected, the weather was cold and nasty as they approached Greenland.

The convoy was escorted by three cutters, the 240 foot Tampa (WPG-48) and two 165 foot “A” class cutters, Escanaba (WPG-77) and Comanche (WPG-76). The convoy escort was commanded by Capt. Joseph Greenspun, USCG. Tampa, commissioned in 1921, was fairly old, her speed, officially 15.5 knots but according to Morison actually 14.5, was less than that of a surfaced U-boat (17.7), but it was similar to that of the smaller Flower Class corvettes that made up the majority of convoy escorts and she was larger and better armed than a corvette.

The two 165 foot cutters, Escanba and Comanche, were really ill-suited for the mission. They were small with a low freeboard, and while credited with a speed of 12.8 knots, according to Morison their actual speed was 11.5 knots, and this was further reduced by icing, slowing the convoy. Icing also effected the escorts’ weapons. According to Morison, “At times they had to heave-to and remove ice with live steam; guns, depth charges and mousetraps (anti-submarine rockets–Chuck) sealed tight by thick ice, and excessive water noise rendered sound gear of little value.” Unable to do more than keep up with the convoy, the two smaller cutters struggled to maintain station on the flanks of the convoy.

The convoy was sailing at a speed of ten knots. The three merchant ships were in line abreast with Dorchester in the center. Tampa led 3,000 yards ahead of Dorchester, and Comanche and Escanaba were 5,400 yards on the flanks, to port and starboard respectively.

On Feb. 2 the weather had moderated, but the convoy was informed that there was U-boat activity in the area.

59 degrees 22′ N, 48 degrees 42′ W, 150 miles West of Cape Farewell, Greenland, during the night, very early on 3 Feb., a torpedo struck the Dorchester on the starboard side in the machinery spaces. About 20 minutes later the Dorchester had sunk.

U-223, on her first war patrol, had approached the convoy from starboard, probably on the surface in the dark, probably having passed between Tampa and the Escanaba. Even at this late date the Escanaba still had no radar.

The U-boat had loosed five torpedoes, meaning she had fired all four of her bow tubes and turned and fired the single stern tube as well. One of the first hit the Dorchester. All the rest missed.

There was confusion on the transport. Many never heard the order to abandon ship. “Three of the 14 lifeboats had been damaged by the explosion, the crew managed only to launch two more overcrowded boats and 33 men left with rafts, but many men evidently did not realize the seriousness of the situation, stayed aboard and went down with the ship.” Most went into the water with nothing more than a lifebelt.

“Escanaba … picked up 81 survivors from the water and rafts and 51 from one lifeboat. Comanche picked up 41 survivors from another lifeboat and 56 from rafts and the water. Hundreds of floating bodies or frozen to wreckage were checked for signs of life. The survivors were landed at Narsarssuak (Greenland) later the same day. 675 lives were lost: the master, three officers, 98 crewmen, 15 armed guards and 558 troops and passengers (including 16 Coast Guardsmen). The following were saved: three officers, 25 crewmen, 44 civilian workers, three Danish citizens, twelve armed guards, seven US Coast Guard personnel and 135 US Army personnel.”

U-223 was a reasonably successful U-boat being responsible for the loss of three merchant ships, a frigate, and a destroyer. She was sunk 30 March 1944 in the Mediterranean Sea, 60 nautical miles northeast of Palermo, Sicily, in a battle with four British destroyers in which she sank one of her pursuers, HMS Laforey.

Four months after the loss of Dorchester, 13 June, 1943, at 0510 Escanaba blew up and sank within three minutes in the North Atlantic.  All but two of her crew of 103 were lost.

Would the result have been any different if the cutters had been more capable? We will never know, but it suggest that if we are ever again in a general war, prepared or not, our cutters will be pressed into service even if they are unsuitable, poorly trained, or inadequately equipped.