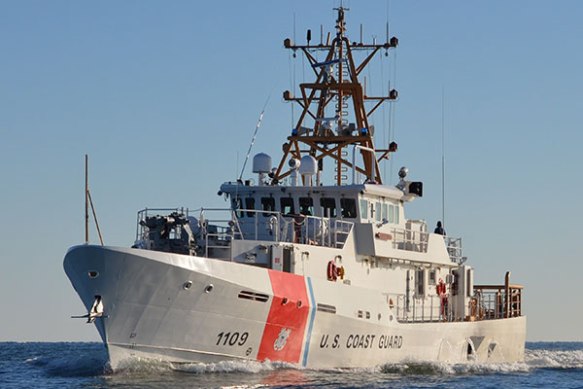 Below is a news release quoted fully. “US Coast Guard to base 2 new cutters in Astoria, Oregon” (sent 04/28/2017 04:31 PM EDT) Note this will happen “starting in 2021.” My estimate is, the first WPC going to Astoria will be FRC #42 give or take one or two numbers. If so, the first Astoria based WPC will probably be funded in FY2017.  This news release may have been intended to asssure the Oregon Congressional delegation that they would be getting some benefit from the FY2017 CG budget.

WASHINGTON — The U.S. Coast Guard announced Friday it will homeport two of the service’s new Sentinel-Class 154-foot Fast Response Cutters (FRC) in Astoria, Oregon, starting in 2021. These two ships have not yet been named, but the FRCs are named after enlisted Coast Guard personnel who distinguished themselves in the line of duty.
Each of the two Astoria-based FRCs will provide the coastal maritime community with a 30 percent increase in annual operating hours on regional waters over the Coast Guard’s legacy 110-foot Island class patrol boats like the Coast Guard Cutter Orcas, homeported in Coos Bay, Oregon.
The FRC is equipped with improved command and control capability as well as increased sea-keeping abilities, operational range, a larger crew and higher transit speeds than the aging110-foot patrol boats. A larger, more capable stern launch cutter boat allows the FRC to conduct search-and-rescue and interdiction operations up to 50 miles away from the cutter, which greatly extends the vessel’s reach over the Coast Guard’s legacy patrol boat fleet.
The Orcas will continue to operate from its homeport in Coos Bay until its service is replaced by the first of the Astoria-based FRCs in 2021.
The Coast Guard is presently examining potential homeport sites within Astoria for the two as-yet-to-be-named FRCs.

Where are they now?

I have only seen definite homeports for ships through #23. There are 18 in D7 (six in Miami, six in Key West, and six in Puerto Rico), two in Cape May, two will be in Ketchikan, and one in Pascagoula. That leaves 35.

Where will they be going?

Wikipedia indicates USCGC Oliver F. Berry (WPC-1124) will go to Honolulu. (The Wiki entry lists the vessels by name and hull number and provides their homeports.)

Honolulu and Pascagoula will likely get at least one additional cutter. Other future homeports already identified are:

I’ve seen indication we will have three in Apra. If we put three in San Pedro and two in Atlantic Beach (only a guesstamate) that only takes us to #34, with 24 still to allocate.

Where will the rest go?:

Homeports of the remaining 110 foot Island class WPBs is probably the best indication. Other than the ports already mentioned these include:

Looking at my earlier post, “Ruminating on Homeports While Playing the Red Cell,” other ports we might want to think about include: