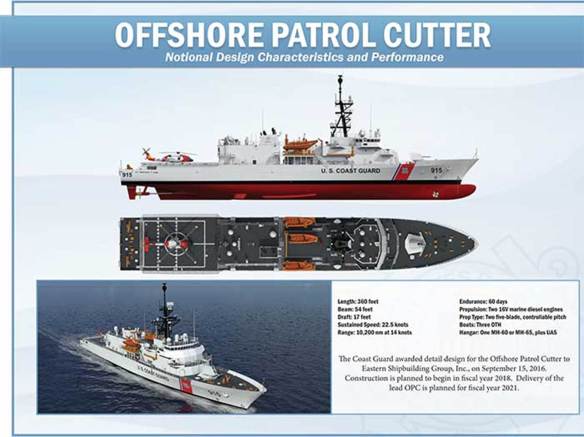 Mr. O’Rourke has been busy, in addition to the report on Icebreakers, the latest edition of the Congressional Research Service report on Coast Guard Cutter Procurement, also by Ronald O’Rourke, was also published on 23 May, 2018. You can see it here.

I have reproduced the summary immediately below.  Note that the price for the OPCs is already surprisingly low.

NSCs are the Coast Guard’s largest and most capable general-purpose cutters; they are intended to replace the Coast Guard’s 12 aged Hamilton-class high-endurance cutters. NSCs have an estimated average procurement cost of about $682 million per ship. Although the Coast Guard’s POR calls for procuring a total of 8 NSCs to replace the 12 Hamilton-class cutters, Congress through FY2018 has funded 11 NSCs, including two (the 10th and 11th) in FY2018. Six NSCs are now in service, and the seventh, eighth, and ninth are scheduled for delivery in 2018, 2019, and 2020, respectively. The Coast Guard’s proposed FY2019 budget requests $65 million in acquisition funding for the NSC program; this request does not include additional funding for a 12th NSC.

OPCs are to be smaller, less expensive, and in some respects less capable than NSCs; they are intended to replace the Coast Guard’s 29 aged medium-endurance cutters. Coast Guard officials describe the OPC program as the service’s top acquisition priority. OPCs have an estimated average procurement cost of about $391 million per ship. On September 15, 2016, the Coast Guard announced that it was awarding a contract with options for building up to nine ships in the class to Eastern Shipbuilding Group of Panama City, FL. The first OPC was funded in FY2018 and is to be delivered in 2021. The Coast Guard’s proposed FY2019 budget requests $400 million in acquisition funding for the OPC program for the construction of the second OPC (which is scheduled for delivery in 2022) and procurement of long leadtime materials (LLTM) for the third OPC (which is scheduled for delivery in 2023).

FRCs are considerably smaller and less expensive than OPCs; they are intended to replace the Coast Guard’s 49 aging Island-class patrol boats. FRCs have an estimated average procurement cost of about $58 million per boat. A total of 50 have been funded through FY2018. The 27th was commissioned into service on April 20, 2018. The Coast Guard’s proposed FY2019 budget requests $240 million in acquisition funding for the procurement of four more FRCs.

The NSC, OPC, and FRC programs pose several issues for Congress, including the following: 

Congress’s decisions on these programs could substantially affect Coast Guard capabilities and funding requirements, and the U.S. shipbuilding industrial base.