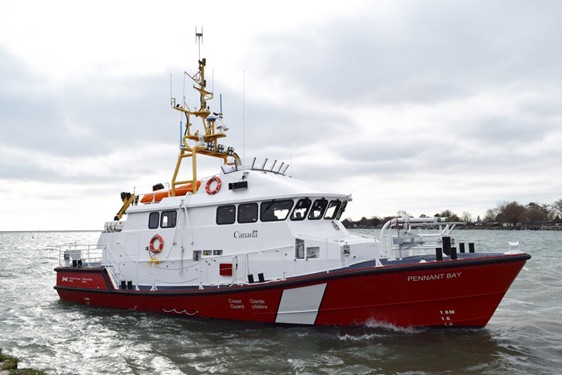 Canada is building twelve large, relatively fast, self-righting Motor Lifeboats. These are the “Bay” class and the first are now making an appearance.

Reportedly they will be “capable of safe operation in extreme weather up to Beaufort Force 12 conditions and are able to survive in 12 meter (40 foot) seas.”

This again brings to mind the fact that at some point we will need to replace the four 52 foot MLBs and we may also want to use the replacement class in other areas where exceptional seakeeping and longer range than the 47 footers is desirable. We did discuss this possibility earlier including some other alternatives and got lots of comments.

These self-righting, 20-meter (65.6 ft–Chuck) boats are powered by a pair of MTU 1600 HP marine Diesel engines providing a speed of up to 24 knots in extreme weather conditions. These vessels are primarily a day boat and will be operated by a crew of up to five Coast Guard seamen.

The vessel’s particulars are as follows: