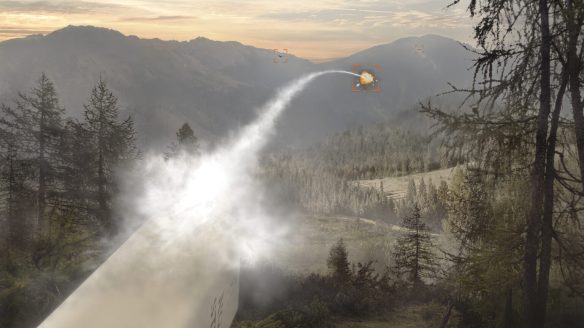 An artist’s conception of an APKWS strike against an unmanned aircraft. BAE SYSTEMS

The Navy League’s on line magazine, Seapower, report the successful test of a new alternative for countering Unmanned Air Systems.

The 2.75-inch test rockets combined standard M151 warheads and Mk66 motors with APKWS precision guidance kits and a newly developed proximity fuze, enabling them to engage and destroy airborne drones at a fraction of the cost of traditional counter-UAS strike capabilities.

As important as this cUAS capability may be, adding this capability to Coast Guard Units would also have the bonus of providing both a capability against a range of surface targets from small, fast, highly maneuverable craft to small ships, and at least a basic anti-aircraft capability.

Adding a launcher and the required laser designator to vessels with Mk 38 mod2/3 gun mounts should not be too difficult. The PATFORSWASIA Webber class FRCs would a good place to prototype an installation.