The USCGC Oliver Henry (WPC 1140) crew arrives in Manus, Papua New Guinea, on Aug. 14, 2022, from Guam as part of a patrol headed south to assist partner nations in upholding and asserting their sovereignty while protecting U.S. national interests. The U.S. Coast Guard is participating with partners to support the Pacific Islands Forum Fisheries Agency-led Operation Island Chief and the larger Operation Blue Pacific through patrols in the Western Pacific in August and September 2022. The other two patrol boats are Australian built Guardian class. (U.S. Coast Guard photo by USCGC Oliver Henry) 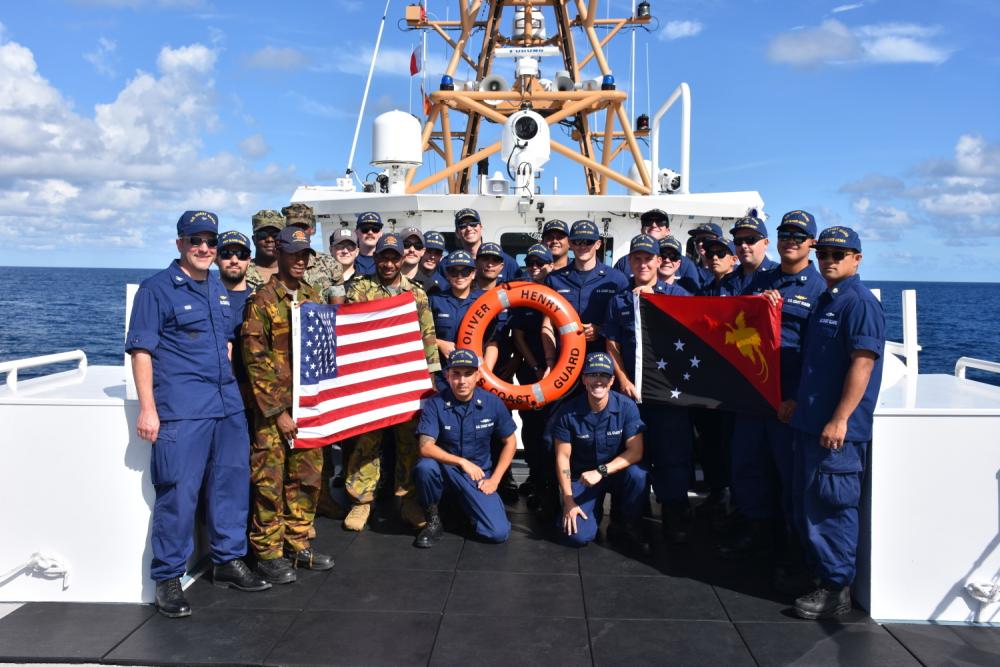 Editor’s Note: Click on the images above to view more images and b-roll video
or download high-resolution versions.

MANUS, Papua New Guinea — The U.S. Coast Guard is participating with partners to support the Pacific Islands Forum Fisheries Agency-led Operation Island Chief and the larger Operation Blue Pacific through patrols in the Western Pacific in August and September 2022.

“Employing our unique authorities, capabilities, and access within Oceania is a privilege. We are eager to further integrate with our Allies and regional partners to protect national interests and combat illicit maritime activity such as illegal, unreported, and unregulated fishing,” said Capt. Nick Simmons, U.S. Coast Guard Forces Micronesia/Sector Guam commander. “Strengthening governance and modeling professional maritime behavior on the high seas and the surrounding waters is one way to counter predatory activity and reinforce the Pacific as a positive center of gravity and sustainable economy.”

The operation covers a substantial area of the Pacific on the high seas and the exclusive economic zones of the Federated States of Micronesia, Papua New Guinea, Australia, and the Solomon Islands, while renewing relationships bolstered by local knowledge and expertise.

“The Oliver Henry crew are committed to regional collaboration and sharing best practices to strengthen our relationships and information sharing,” said Lt. Freddy Hofschneider, commanding officer of Oliver Henry. “The U.S. Coast Guard has been a dedicated partner in the region for decades. We appreciate the support of our colleagues as we take this ship across vast distances in this region, making some transits and port calls for the first time.”

A significant emphasis of the operation for the U.S. Coast Guard is the ongoing emphasis on fisheries and resource protection.

“The Pacific Ocean is home to some of the world’s most abundant fisheries,” said Simmons. “These fisheries are living marine resources, part of the global food chain, representing food security and an economic engine for many of the Pacific Island Nations. By leveraging our cutters, aircraft, and intelligence professionals, the U.S. Coast Guard continues our strong partnership with the Pacific Islands Forum Fisheries Agency and its members to protect this vital marine ecosystem and ensure continued economic prosperity and a thriving ocean for future generations.”

According to FFA, partners are seeing increasing success through multilateral operations in the Pacific to tackle IUUF. These operations evolved from a focus on protecting against illegal boats entering the fisheries to policing the operations of licensed vessels that haven’t followed the rules and regulations governing their activities. The Pacific region is a vast expanse, and collaboration across the many partners, providing personnel and assets, is crucial to ongoing success.

The Oliver Henry is the 40th Sentinel-class fast response cutter. The ship arrived in Guam and was commissioned along with its sister ships, Myrtle Hazard and Frederick Hatch, in July 2021. In the time since, the crew has participated in several search and rescues cases, completed a counternarcotics patrol off Guam with the Japan Coast Guard patrol vessel Mizuho, and conducted sovereignty and fisheries patrols in the Forces Micronesia/Sector Guam area of responsibility.

For more U.S. Coast Guard Forces Micronesia/Sector Guam news, visit us on DVIDS or subscribe! You can also visit us on Facebook at @USCGSectorGuam.