The following is a 5th District press release quoted in full.

The shipwreck that changed the Coast Guard forever 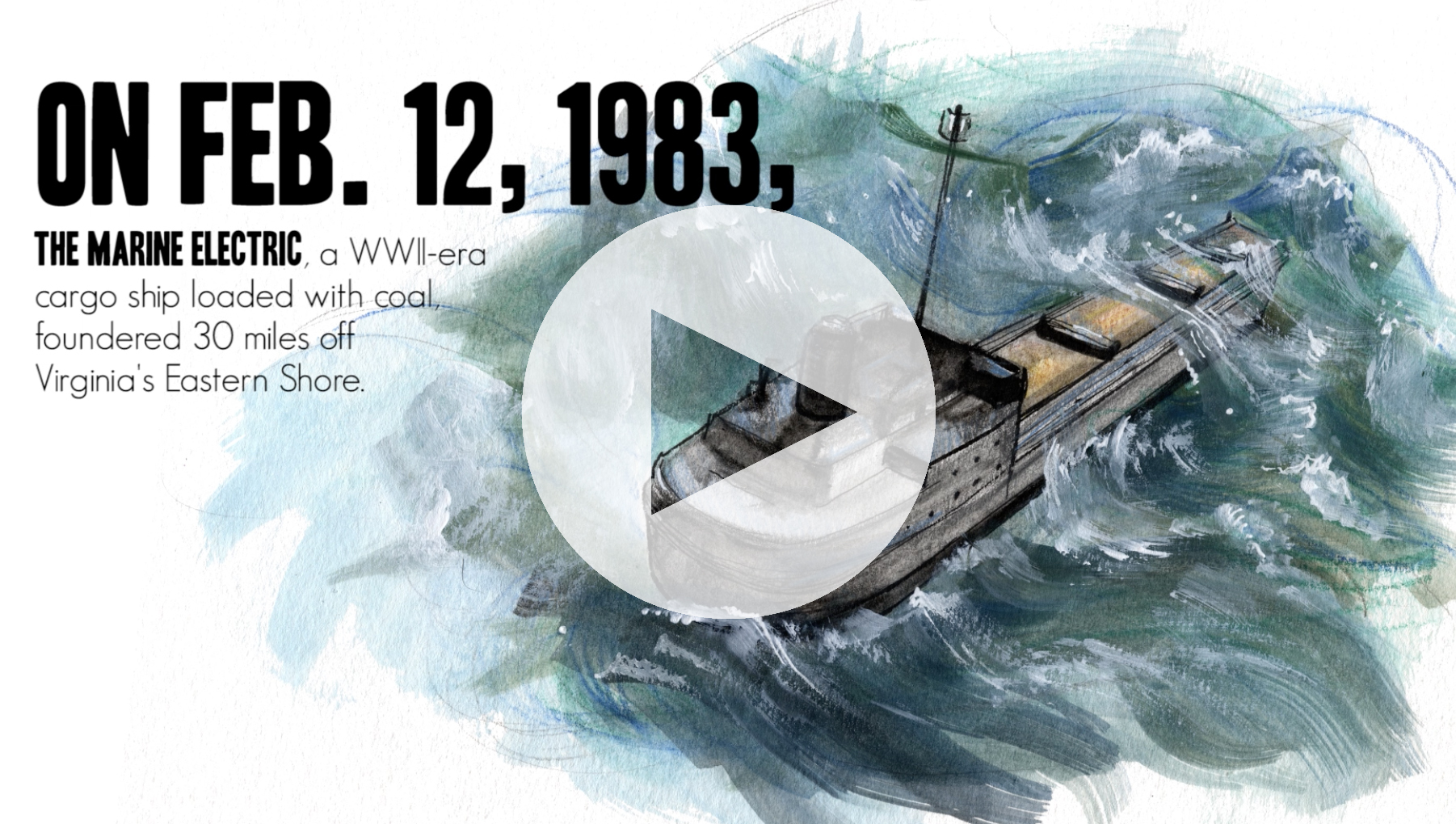 When the clock tolled 12 a.m. on Feb. 12, 1983, the 605-foot cargo ship Marine Electric trekked northward 30 miles off Virginia’s Eastern Shore, plowing slowly through the gale-force winds and waves stirred up by a winter storm.

An able-bodied seaman relieved the watch and peered forward, noticing for the first time that the ship’s bow seemed to be riding unusually low in the water. Dense curls of green ocean rushed over the bow, some of

them arching 10 feet over the deck before crashing back down. The crew had been battling 25-foot waves for hours, but until now, the bow had bucked and dipped as normal.

Now it seemed only to dip.

Over the next two hours, the waves intruded with increasing vigor. The entire foredeck was swallowed in 6 feet of water. The main deck was completely awash.

At 2:30 a.m., the ship’s master, Phillip Corl, summoned his chief mate, Robert Cusick, to the bridge and shared his fears: the bow was settling, they were taking on too much water, and the crew was in real trouble.

At 2:51 a.m., the captain made the first radio distress call to the Coast Guard.

“I seem to be taking on water forward,” Corl said. “We need someone to come out and give us some assistance, if possible.”

By the time assistance arrived, the Marine Electric had listed, rolled violently to starboard, and capsized, hurling most of its 34 crew into the 37-degree water. Chaos ensued.

Chief mate Cusick surfaced with a gasp, managed to get his bearings, and spotted a partially-submerged lifeboat nearby. After swimming through towering waves for 30 minutes, he pulled himself into the swamped boat and started thrashing his legs to stay warm.

“All the time I kept looking out and yelling out, ‘lifeboat here,’ just continually yelling out to keep myself going,” the chief mate said. “Then I waited and prayed for daylight to come.”

The Coast Guard had long since dispatched an HH-3F Pelican helicopter crew from Air Station Elizabeth City, North Carolina, and directed the crews of several cutters to the Marine Electric’s position, but the tumultuous weather conditions slowed the rescuers’ progress.

At 5:20 a.m., the Coast Guard helicopter crew was the first to arrive on scene. They had expected to find the Marine Electric’s sailors tucked into lifeboats and rafts, but instead, they found a blinking sea of strobe lights, empty lifeboats, and bodies strewn below.

The Navy aircrew arrived and deployed McCann, who tore through the oil-slicked waves, searching for survivors. He managed to recover five unresponsive sailors before hypothermia incapacitated him.

The Coast Guard crew scoured the southern end of the search area and discovered one man, Paul Dewey, alone in a life raft. They dropped the rescue basket so he could clamber inside, then hoisted him into the helicopter. About 30 yards away, they spotted Eugene Kelly, the ship’s third mate, clinging to a life ring, and lowered the basket to retrieve him.

Cusick remained huddled in his lifeboat until the sailors aboard the Berganger, a Norwegian merchant vessel whose crew was helping search the area, sighted him and notified the Coast Guard. The helicopter crew retrieved him in the rescue basket, then took off for Salisbury, Maryland, to bring the three survivors to Peninsula Regional Medical Center.

Meanwhile, more Coast Guard and Navy rescue crews converged on the scene to search for survivors.

Coast Guard Capt. Mont Smith, the operations officer at Air Station Elizabeth City, had piloted a second Pelican helicopter through turbulent headwinds for over an hour in order to reach the site.

He and his crew scanned the debris field below for signs of life. The people they saw were motionless, and it was difficult to determine whether they were simply too hypothermic to move, or deceased. Smith spotted one man and hovered over him, squinting through the whipping snow, trying to decide what to do.

“We all felt helpless,” Smith said. “There was no way to know if the man was dead or alive. We had to try something.”

Petty Officer 2nd Class Greg Pesch, the avionics electrical technician aboard the helicopter, volunteered to go down on the hoist cable. After some deliberation, Smith agreed.

Pesch’s descent in the rescue basket was a harrowing one.

“The whole world seemed to be churning,” Smith said. “I struggled to maintain a smooth hoist, but I know it was erratic.”

Once in the water, Pesch grappled with the basket, trying to hold it steady as he guided the unresponsive man inside. It took several attempts, and then he scrambled into the basket himself and ascended back to the helicopter alongside the victim.

The aircrew spotted another potential survivor, and although Pesch attempted to descend again, the hoist cable spooled back on itself on the drum. The crew was forced to abort their mission and departed for nearby Salisbury Airport, where the man they had pulled from the water was pronounced dead on arrival by paramedics.

Dewey, Kelly and Cusick were the only men pulled from the ocean alive that morning. Their 31 shipmates had either succumbed to hypothermia or drowned.

All told, Coast Guard, Navy, and merchant vessel crews recovered 24 bodies from the scene of the capsizing. Seven were never found. It is likely the ship’s engineers were trapped belowdecks when the vessel capsized.

“Throughout Coast Guard history, the missions of the service have been written in blood,” said Dr. William Thiesen, historian, Coast Guard Atlantic Area. “Such was the case with the loss of the Marine Electric. This tragic event led to stricter marine safety regulations and the establishment of the Coast Guard’s premiere rescue swimmer program.”

While the incident itself served as the catalyst for the major changes to the Coast Guard and maritime community at large, the rigorous efforts of Coast Guard Capt. Domenic Calicchio brought the necessity for such changes into sharper focus.

Calicchio was one of the three marine safety officers charged with investigating the capsizing and sinking of the Marine Electric. The board of inquiry launched their investigation on July 25, 1984, and examined every aspect of the WWII-era cargo ship, its upkeep, the events leading up to its demise, and the Coast Guard’s rescue efforts on that morning.

The investigation revealed that although the Marine Electric had been recently inspected several times by both the American Bureau of Shipping and the Coast Guard, marine inspectors had failed to note several discrepancies or recommend needed repairs. Investigators concluded that the casualty had most likely been caused by inadequate cargo hatches and deck plating, which allowed the crashing waves to flood the vessel’s forward spaces.

His push for reform resulted in several additions to the Coast Guard’s marine safety protocol, including guidance on hatch cover inspections, and new requirements for enclosed lifeboats and their launching systems, for ships’ owners to provide crews with cold water survival suits, and for flooding alarms to be installed in unmanned spaces on vessels.

The Coast Guard also tightened its inspections of 20-year or older ships, which led to the near-immediate scrapping of 70 similar WWII-era vessels.

“Calicchio embodied the service’s core values of honor, respect, and devotion to duty,” said Thiesen. “He championed marine safety and pursued the truth even at the risk of his career of a Coast Guard officer.”

While the Coast Guard changed many policies to make a safer marine environment after the the sinking of the Marine Electric, the service continues to make improvements on its marine safety program today. By 2025, it is estimated that the demand for waterborne commerce worldwide will more than double. The Coast Guard has published its Maritime Commerce Strategic Outlook in preparation for the increasing demand.

The Marine Electric shipwreck also served as the genesis of another crucial development: the Coast Guard rescue swimmer program, which was established in 1984. The program’s physical fitness standards, training and organizational structure were developed over a five-year implementation period, and in March of 1985, Air Station Elizabeth City became the first unit to receive rescue swimmers.