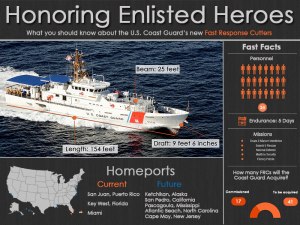 The Acquisitions Directorate has a story on the commissioning of the 17th Webber class WPC, USCGC Donald Horsley (WPC-1117).

Included in the post was the graphic above, which gives us an indication of where future cutters will be homeported:

One more WPC is expected to go to San Juan, so in about six months we should see a Webber class go to Ketchikan. Certainly its improved sea keeping compared to the 110s will be appreciated.

This is not, I’m sure, a complete list of future homeports, given that we expect 41 more of this class. I’m not privy to the home porting plan or how many will be in each port, but this looks like it will cover at least the next 18 months. It may cover a much longer period if more than one Webber class will be assigned to some of these ports, and that seems likely.

I would note that these homeports look good from a Ports, Waterways, and Coastal Security perspective. Ketchikan and the inland passage has a lot of cruise ship traffic. San Pedro is near the huge Los Angeles port complex and the strategic ports of Long Beach and Port Hueneme. Pascagoula based ships potentially protect the ports of the Eastern Gulf of Mexico including the eastern approaches to the Mississippi River port complex and the strategic port of Gulf Port, MS. Atlantic Beach, NC is close to Cape Lookout and Cape Hatteras, but it is also close to the strategic ports of Morehead City, Sunny Point, and Wilmington. WPCs in Cape May, NJ could provide protection for Delaware Bay, including the strategic port of Philadelphia.

If any of our readers has access to the homeporting plan, and it is public knowledge, I would appreciate the information.