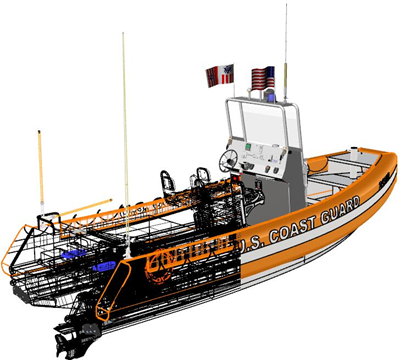 The RIBs are designed for a top speed of 35+ knots carrying up to 13 passengers with an operating range of 200 nautical miles in up to four-meter wave heights.

A Sept. 6, 2018 Press release announced the award of the contract to Metal Craft Marine.

The contract has a maximum value of $20 million and allows for the acquisition of more boats over an ordering period of five years. The initial delivery order for two CB-Ls, trailers, delivery, training and associated logistics documentation was placed for approximately $590,000.

The CB-L will replace the current fleet of 24-foot cutter boats in service onboard 210-foot medium endurance cutters, 225-foot seagoing buoy tenders, and Coast Guard Cutters Alex Haley and Mackinaw. The boats will support operations on the East, West, and Gulf Coasts, as well as in Hawaii, Guam and Alaska.

“We are very excited about getting this asset out to the fleet,” said Cmdr. David Obermeier, deputy program manager for boats acquisition. “A single boat class for multiple cutter classes will provide enhanced operational flexibility.”