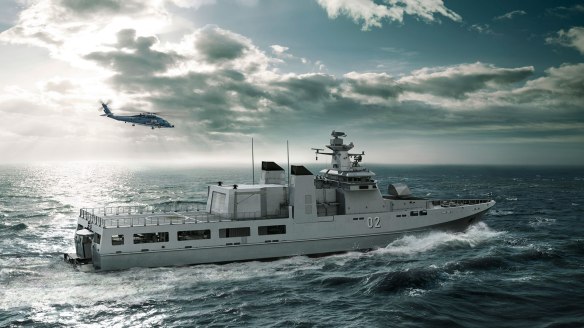 NavyRecognition reports that Bulgaria has approved the purchase of two Offshore Patrol Vessels (OPV) from the German firm Lürssen. This is the same company that designed OPVs for Australia and Brunei, but these will be different from the earlier ships.

“…the Bulgarian Navy has a requirement for two modular, multi-role patrol vessels, which would be capable of performing various types of tasks, such as anti-submarine and anti-surface warfare.”

“According to local media, the Bulgarian Ministry of Defense (MoD) has requested a ship that will be armed with one 76mm naval gun, anti-ship and surface-to-air missiles, lightweight torpedos and close-in weapon systems for self-defence. The ship will also have a flight deck to accommodate a medium-sized helicopter.”

Lürssen’s descriptions of their OPV offerings make no mention of an ASW capability, but they do have space for containerized systems that might include some type of towed array sonar. Because of the capabilities required, along with the larger crew required to support them, I would assume that the chosen design is based on the larger 85 or 90 meter offerings. According to the company web site the 90 meter OPV is typically equipped with:

(Bulgaria does already have Exocet and Sea Sparrow missiles in their inventory.)

Bulgaria’s Navy is small but growing. They still have a lot of Soviet/Eastern Block equipment. Bulgaria’s coast is on the Black Sea. Other nations bordering the Black sea are Georgia, Romania, Russia, Turkey, and Ukraine. Of these Russia has the strongest naval presence.

No indication yet where the ships will actually be built.

A map showing the location of the Black Sea and some of the large or prominent ports around it. The Sea of Azov and Sea of Marmara are also labelled. Created by User:NormanEinstein, Wikipedia