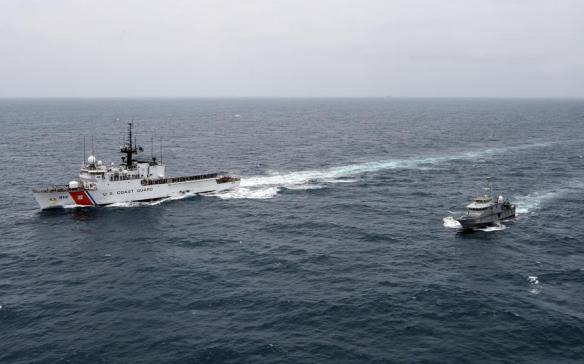 USCGC Mohawk sails alongside a Nigerian navy ship in the Atlantic Ocean, Aug. 22, 2022. Mohawk was on deployment in the U.S. Naval Forces Africa area of operations. (Jessica Fontenette/U.S. Coast Guard)

While incidents are up in Southeast Asia, there has been a notable drop in incidents in the Gulf of Guinea, where the Coast Guard has been actively engaged in capacity building.

“The Gulf of Guinea saw a continued and much needed reduction is attributed to an overall decrease of pirate activity, with the number of incidents falling from 35 in 2021 to 19 in 2022.”

Off Somalia there has been both a sustained counterpiracy effort and allied patrols to interdict arms bound for rebels in Yemen.

“For a fourth year in row, there were no incidents of piracy or armed robbery by Somali-based pirates…”