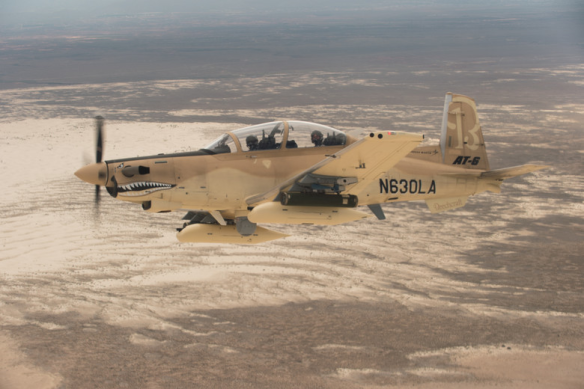 Defense News reports that Thailand has become the first international customer for the Textron Beechcraft AT-6 light attack aircraft.

Thomas Hammoor, president and CEO of Textron Aviation Defense, said in a statement that the Royal Thai Air Force selected the Beechcraft AT-6 to conduct a broad array of missions in support of border security as well as anti-smuggling, counternarcotics and anti-human trafficking operations.

This is basically the same aircraft Coast Guard aviators train on before they get their wings, but with upgrades. I can’t help but think something like this or the similar Embraer A-29 Super Tucano could handle a lot of ISR missions more economically than what we are using now.

They could be used to scout for D7 Webber class FRCs doing drug or migrant interdiction and provide shots across the bow and over-watch in lieu of a helicopter.

The Washington DC air intercept mission in particular comes to mind. Local searches for overdue boats is another possibility. As you can see these aircraft support integrated electro-optical sensors.

An AT-6 Beechcraft is on display at the 2021 Dubai Airshow. (Agnes Helou/Staff)

Armed, these could also provide a response to terrorist attacks. My earlier ramblings on Coast Guard aircraft missions here.

I did an earlier post on this aircraft because it was offered also as a potential Coast Guard ISR (intelligence, surveillance, reconnaissance) asset for Coast Guards, but this post seemed to offer enough new insights to justify another post.

It still appears to be a economical, highly flexible, reconfigurable alternative to land based UAVs, that can quickly put sensors where we need them, with additional potential for air-policing and an armed response to maritime terrorist attacks.

Given all the attention the attack component of the Scorpion has received in the press, it is often overlooked that the aircraft is built around a payload bay.
The modular payload bay is impressive with great volume, electrical and cooling capacity for a wide variety of payloads/sensors.
One example is the L-3 Wescam MX-25 – now capable of full retraction into the payload bay.
The MX-25 is L-3 Wescam’s largest electro-optical/infrared camera.
For comparison purposes, the US Navy P-8 Poseidon utilizes the slightly smaller L-3 Wescam MX-20.
Aside from great payload flexibility, the Scorpion is night vision capable and both the front and rear cockpits are prepared for use with the Thales Visionix Scorpion Helmet Mounted Cueing System.