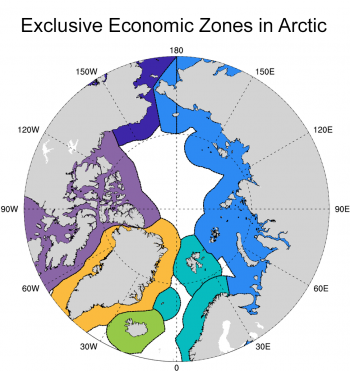 This map show the exclusive economic zones (EEZs) within the Arctic: Canada (purple), Greenland (orange), Iceland (green), Norway (turquoise), Russia (light blue), and USA (dark blue). As sea ice reduces there will be more opportunity for ice to drift from one EEZ to another, which has implications for the potential spread of pollutants.
Credit: DeRepentigny et al., 2020

NORTHCOM’s on-line magazine, The Watch, has a short post about the Arctic.

The Coast Guard has had good relations with the Russians in the Arctic because of a common interest in fisheries, SAR, and environmental protection. That is all to the good. At some future date, the Coast Guard will probably do a Freedom of Navigation Exercise through the at least parts of the Northern Sea Route. Hopefully we can find ways to, perhaps, disagree amicably as we have with the Canadians in regard to the Northwest Passage.

A reminder from the US Naval Institute of an issue that Russia and Canada share in opposition to the US–passage through Arctic Straits.

Let’s not forget that, when the US Navy wants to do “Freedom of Navigation” Exercises through the Northern Sea Route, there will be a Coast Guard icebreaker leading them.

An interesting discussion of the Navy’s proposed Freedom of Navigation Operation (FONOP) in the Arctic which would presumably require Coast Guard assistance.

Within these stories are three different ideas: first, that the Navy is interested in expanding its physical presence in Alaska, through returning to Adak and/or a port on the Bering Strait ( Nome has been discussed for years); second, that Navy personnel need to regain operational familiarity with the Arctic environment; and third, that the Navy appears to be considering a freedom of navigation operation (FONOP) in the Arctic for summer 2019.

The first two ideas are unremarkable. Given the dearth of infrastructure and the challenging environment, both improved facilities and practical learning opportunities are required to ensure Navy vessels and aircraft operate safely and effectively.

The third idea—conducting a FONOP in the Arctic in just a few months—is a bombshell.

I seem to remember hearing that this had been discussed, and the Commandant had taken the position that the Coast Guard could not support the idea of a Freedom of Navigation Operation given the state of our icebreaker “fleet,” but apparently the idea is still alive, at least as of mid January.