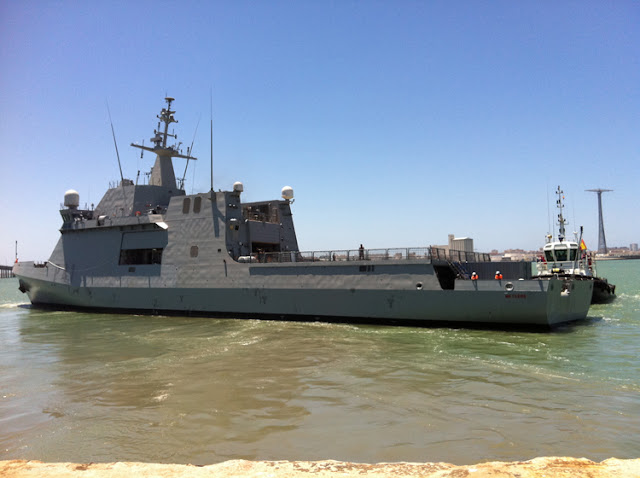 The first of an interesting series of offshore patrol vessels that approximate MEC/OPCs has completed sea trials. There is much more detailed information about the project here. Their hybrid machinery arrangement is particularly interesting.

Add another to the list of places where national interests clash over claims to offshore areas. Spain and Britain have had a long running dispute over Gibraltar and the surrounding waters. Despite progress toward “European Unity,” they don’t  seem to be getting along very well. May 3, a Spanish patrol vessel, the Atalaya (just a bit larger than a 210, photo of a sistership top left), entered waters claimed by Britain and ordered all anchored merchant shipping to leave. The authorities in Gibraltar sent out HMS Scimitar (illustrated to the right by her sister ship) to enforce their position.

None of the merchant ships weighed anchor and after about an hour and a half the Atalaya left. “Strongly worded note to follow.”

Rather sad to see “HMS Scimitar” as a 52 foot boat when in a previous generation it was one of a class of 67 destroyers.