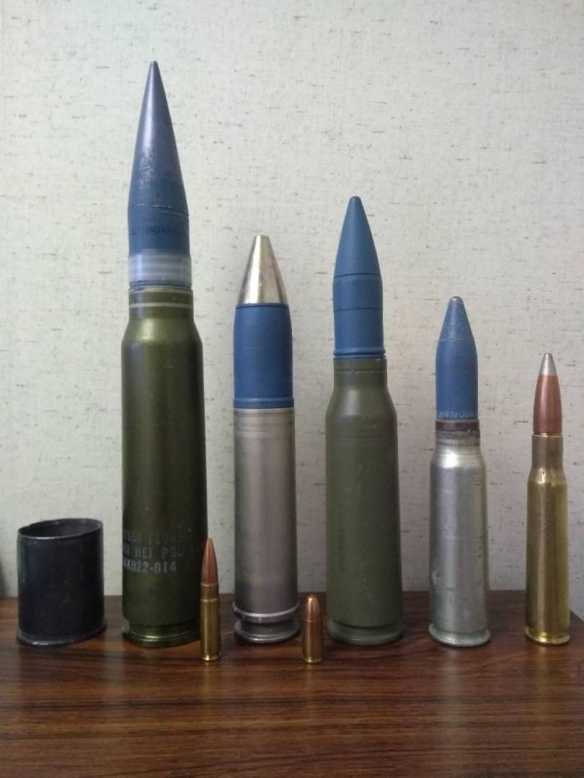 We have known for a long time, the 30mm was much more effective than the 25mm even against relatively small vessels. We really did not need the test to show that, physics is very much on the side of the larger round, but the revalation was how ineffective the 25mm using HEI rounds, really was.

More recently, two options that are not available for the 25mm, have made the case for the 30mm even more compelling, an airburst round that can be used against UAVs and a swimmer round that is much more likely to penetrate the hull if if it hits the water short of the target, subjecting the target to flooding.

Then we saw reports that the Navy was procuring a new, very different Mk38, the 30mm mod4.

Recently, one of our readers, Secundius, in an in comments discussion of the status of the ALaMO guided 57mm projectile program, pointed to a document that reports the funding of Navy Department ammunition purchases. (Incidentally the ALaMO round is in service now. MAD-FIRES is in a 27 month, third stage of development, that should end, January 2023.)

Using the document, I took a look at “other ship gun ammunition,” specifically looking at 25 and 30mm ammunition, in hopes of seeing evidence of fielding of the 30mm Mk38 Mod4.

We know the Polar Security Cutter will get the Mk38 Mod4 and that, reportedly, existing installations of the Mk38 Mod2/3 are not expected to be replaced by the new mount.

I feel strongly that if the US ever experiences a terrorist attack, using a medium to large ship, the key asset, that will oppose them, will be a Webber class WPC.

Other US armed forces are not prepared to respond to this threat. There are no Navy ships near most of our ports. Our larger cutter will be either on distant patrol or unable to get underway in time. The Webber class will likely be the most heavily armed cutter available.

To be able to avoid being disabled by improvised armaments such a threat might bring along, e.g. ATGM, heavy machine guns, or anti-tank and anti-aircraft guns, we need to be able to engage from at least 4,000 yards.

Reportedly the 30mm MK258 MOD 1 APFSDS-T Swimmer round, “provides a short time of flight, high impact energy and maximum penetration capability out to more than 4 000 m,” so it should meet the range requirement. The effective range of the 25mm is only 2,700 yards (2,457 m) using HEI projectiles. It is probably over 3,200 yards using the APDS projectile.

The Coast Guard can make a strong case, that ships armed with nothing larger than the 25mm Mk38, specifically the Webber class, should either, be given the more capable 30mm Mk38 Mod4, or have short range missiles like APKWS or Hellfire mounted on the existing mounts (which might be the simplest and best solution). Similar missiles have already been mounted on the Israeli mount that is the Mk38 Mod2/3 and on the MSI mount that is the Mk38 Mod4. (My thoughts on countering such a terrorist threat and what we can do with what we have now are here.

To validate the capability of the 30mm with the APFSDS-T round, we really ought to do a SINKEX, using only this weapon from a range of 4000 yards or more. While a larger target might be more appropriate, the Coast Guard could offer up one or two of its decommissioned Island class 110 foot WPBs as targets for the 2024 RIMPAC. The 30mm used for the SINKEX might not be on a Coast Guard vessel, but perhaps if the first OPCs emerge with the 30mm Mk38 Mod4, they could have the honors. Using an OPC in a Coast Guard SINKEX would be a great debut for the new class, and if the 30mm proves ineffective, after expending the equivilent of an FRC’s ammo allowance, the OPC could then use the 57mm Mk110, perhaps with ALaMO ammunition.

We need to see how effective our weapons and their ammunition really are.

We have already had sort of a SINKEX using the 25mm, and it did not turn out well.