The US Naval Institute News Service has provided an update on the FFG(X) program, based on a Jan. 15, 2019 presentation at the Surface Navy Association Symposium, by Regan Campbell, Program Executive Office, Unmanned and Small Combatants, which provides both a projected lower unit cost approaching $800M for follow on units (not a lot more than the Coast Guard was paying for its National Security Cutters) and a list of minimal equipment to be included in each ship

There is one particular item on the list of equipment that may be significant for the Coast Guard, “57mm gun (with ALaMO)”. That means the “Advanced Low Cost Munition Ordnance” or ALaMO program to provide guided projectiles for the 57mm Mk110 gun is still on track. Apparently ALaMO uses the same guidance system developed for the Hyper-Velocity Round.

The FFG(X) will also share, in common with all the NSCs, the Mk160 Gun Fire Control System, and with the later NSCs, the Mk20 Electro-Optic Sensor System (Mods may be different). This means we can expect continued Navy support of these systems over the long-term.

Request for Proposal is to be issued Q4FY2019. Contract award is expected Q4FY2020.

I note there is still no image available for Huntington Ingalls proposal which may be based on the National Security Cutter.

Below is a list of equipment for the FFG(X) found on page three of the presentation. I can not claim to recognize all the acronyms. Interestingly there is space and weight reservation for a 150 kW Laser Weapon.

The National Interest is reporting that the Russians are planning to use lasers as a way to facilitate icebreaking.

…. “Later this year, scientists aboard the Dixon, a Russian diesel-powered icebreaker operating in the White Sea, will begin testing of a 30-kilowatt ship-based laser, designed specifically for easing the movement of ships operating in the Arctic environment,” Sputnik News said. “The project involves experts from the Moscow-based Astrofizika Design Institute, with the assistance of St. Petersburg’s Arctic and Antarctic Research Institute.”

A Russian physicist told Russian media that the new laser is designed as an ice cutter rather than a weapon. “We’re talking about easing as much as possible navigation through northern regions. In addition, it’s necessary to test empirically calculations, create the system, measure energy consumption and calculate many other parameters. For the first stage this is enough.”

The author of the post may be a bit confused. He refers to,

But he refers to the Project 23550 (Ivan Papanin) class icebreaking patrol vessels which we talked about earlier, armed but relatively small (for an icebreaker) and definitely not nuclear powered icebreaking patrol ships with provision for mounting containerized cruise missiles.

The author seems to have assumed that the laser could also be used as a weapon although the mounting and targeting requirements for a laser weapon would be much different.

Despite the author’s apparent confusion, this is the first I have heard of using lasers to facilitate icebreaking. Using one to open a crack in the ice before the bow hits might be worthwhile. Whether it is even feasible ought to be something that could be determined mathematically.

“The addition of a 60kW TLS would provide true selectable and scalable effects ranging from non-lethal to lethal. This would allow for new response options in both conventional and irregular conflicts.”

Note the laser on the USS Ponce is only 30 kW.

How it might be useful: It could be used in a less than lethal mode. It could probably be used for disabling fire against outboard motors with greater precision than a gun. It could be used to destroy UAS (drones) inside ports without worrying about where misses might land. 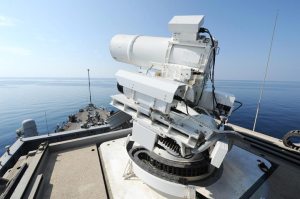 This Navy Times story is one of several I have seen that report Rep. Duncan Hunter’s (R-CA) displeasure that the Coast Guard is unable to use some of its laser equipment because of FDA regulation.

Representative Hunter has done us a favor in bringing attention to the issue, but ultimately I think he will find that the FDA oversight requirement is based in law and Congress will have to change it.

There is, after all, a reason for regulating the use of lasers. We don’t like it when they are directed at our aircraft or at ships. We don’t want to blind people we are attempting to rescue. (Incidentally where is the FDA regulation of lasers in  the hands of civilians?)

“Hunter wants to cut that red tape and allow the Coast Guard to certify its own laser systems, like the other military branches…”

That is all very well, but the Coast Guard probably does not have many laser experts who can do that, and we should not trust the word of our contractors. If Representative Hunter wants to introduce a bill to cut some of the read tape, by all means allow the Coast Guard to self certify if they develop the independent expertise to do that, but it would be more immediately useful if there was simply provision for DOD certification of Coast Guard equipment. This should include automatic application of DOD certification to any DOD type Coast Guard equipment used for the purpose for which it was certified.

DefenseMediaNetwork has an interesting article about progress on weaponizing Lasers for use afloat. Some points that might be of particular interest to the Coast Guard were:

The Laser can be a less than lethal deterrent,.

“A laser offers scalable effects, from deter-and-dissuade to degrade or destroy. LaWS can address multiple threats using a range of escalating options, from non-lethal measures such as optical “dazzling” and disabling, up to lethal destruction of small attack boats and UAVs.”

The accompanying optics have other uses,

“The systems provide better high-resolution imagery than what existing shipboard EO/IR sensors provide now. With upgraded optics, a system like CLWS can bring targets as close as 1 kilometer or as far as 37 kilometers into clear focus. ‘The system enhances intelligence missions without engaging targets,’ …”

The Coast Guard has recently experience a rash of laser attacks.

Dec.1, an H-65 from Port Angeles. “A Coast Guard helicopter crew was forced to cut a training mission short after they were targeted by someone with a laser near Port Angeles Monday night…The MH-65 Dolphin helicopter crew was airborne when a laser was shined at them around 6:30 p.m, forcing the crew to abort the mission and return immediately to Air Station Port Angeles, where they landed safely.”

1 Dec. an H-65 from Traverse City. “On Monday at 8:30 p.m., a Coast Guard MH-65 helicopter with Coast Guard Air Station Traverse City, Michigan, was hit with a laser while flying in the vicinity of Lake Okeechobee, Florida. Crewmembers aboard the aircraft reported the laser came from land.”

3 Dec. “…a 45-foot motor lifeboat crew at Coast Guard Station Channel Islands that four of the members were struck twice with a laser while transiting near the Channel Islands Harbor entrance. Crewmembers reported that the laser came from shore and once they energized their blue law-enforcement light, the laser desisted.”

Fortunately there were apparently no injuries.

As noted in the one of the press releases, “Pointing a laser at an aircraft is a federal crime and a felony offense under Title 18, United States Code, Section 39A. If found guilty, offenders could be fined up to $250,000 and sentenced to five years in prison. ”

Don’t know what the punishment for pointing a laser at a boat crew is, but it should also be significant.