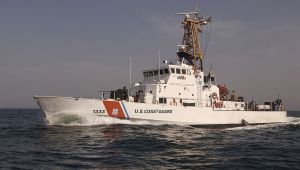 Not long ago we talked about the need to preserve lessons learned from atypical (usually military) Coast Guard operations like participation in the Vietnam War or operations in South West Asia. Craig Allen Jr. brought to my attention a LANTAREA historian’s publication, “Guardians of the Gulf: A History of Coast Guard Combat Operations in Support of Operation Iraqi Freedom, 2002-2004” (pdf) by William H. Thiesen, PhD, June 2009

Regarding the deployment of WPBs the study noted, “Even though the Coast Guard served a similar mission in Vietnam, there existed no operational plan to provide guidance for OIF planning and preparations.”

If the Coast Guard does not yet have a contingency plan for deployment of patrol vessels there is enough detail to make a fair start on a checklist of things to be done. The experience of the WPBs deployed to the Mediterranean can leave little doubt of the Webber Class’ ability to go almost anywhere, given time to avoid bad weather.

“On May 14, the five cutters (one 378 and four 110s–Chuck) began the return trip; however, this time the smaller cutters followed Dallas across the Atlantic rather than riding on board an MSC vessel. The 5,000-mile voyage set a record as the longest transit ever completed by a 110-foot cutter. The PATFORMED fleet had performed its escort and MIO mission admirably. Moreover, the WPBs in the Mediterranean and the Arabian Gulf had set records for hours of operation with some of them deploying for over thirty days of operation.”

For the future, there might be some advantage in organizing at least a few of the Webber class in deployable divisions (3 units) and squadrons (six units) as discussed earlier, with or without augmentation since there will be several location with three or more WPCs.