Since the Coast Guard chose to base six Webber class in each of three different ports (18 total in Miami, Key West, and San Juan), it has seemed apparent that the Webber class were more than “fast response cutters,” sitting in port waiting for an alarm to ring sending them rushing off to a SAR case. It seemed likely these little ships, more than twice as large as the Island class 110 foot WPBs, would be used for offshore patrols much like an MEC.

This is perhaps colored by my recollection of WMECs (and even WHECs) that had no helicopter facilities. There were at one time 165, 143, and even 125 foot WMECs.

Coast Guard Compass brings us confirmation of the offshore capability of these vessels. USCGC Oliver F. Berry (WPC-1124) has completed a mission to conduct operations in the Republic of the Marshall Islands, 2,200 miles from her homeport. She conducted fisheries enforcement and capacity building, and laid the foundations for future missions to the Central Pacific.

Coast Guard cutter crews visit and work in the exclusive economic zone of partner nations throughout the year to help exercise bilateral agreements protecting sovereignty and resources in the Pacific. The ability of the FRCs to patrol this region increases the number of Coast Guard assets capable of operating in the area. About 66 percent of the world’s tuna comes from the Western and Central Pacific according to the National Fisheries Institute and fisheries are the primary economic driver in the Pacific, especially for small Pacific Island Nations. Illegal, unreported and unregulated fishing results in losses of more than an estimated 21 to 46 percent of catch representing a $1.5 billion revenue loss in the region according to the Marine Resource Assessment Group. This loss can have a direct effect on peace, governance and a continued American presence as transnational crime may supplant traditional fishing to fill voids created by economic declines. This threat is why a robust multilateral enforcement presence is crucial.

This is an area that has been seldom patrolled in the past. China is interested in replacing American influence with their own. It is an area we should not ignore. (see also) 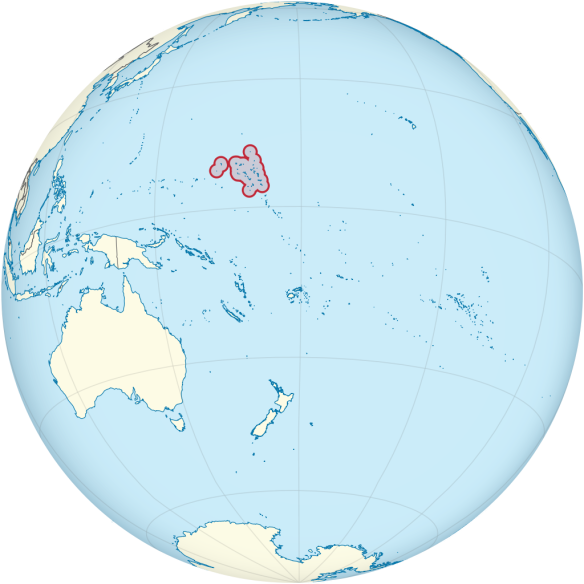 Republic of the Marshall Island. Illustration by TUBS from Wikipedia

Beyond our obligation to other Pacific Island nations, 29.3% of the US EEZ is around Pacific islands beyond Alaska and Hawaii,  including the Pacific Remote Islands Marine Monument which is larger than the entire Atlantic coast EEZ.

The eight day transit to and from the Marshall Islands was facilitated by USCGC Walnut (WLB-205) which transferred 8,000 gallons of fuel during two underway replenishments.

CCGD14 was in deed thinking outside the box, but maybe it will lead to other things. Webber class are already doing drug enforcement missions far South into the Caribbean. It appears, with a little support from larger vessels, the 18 District Seven Webber class ought to be able to continuously provide three FRCs in the Eastern Pacific.

Incidentally I am not suggesting a designation change. The WPC designation for the Webber class is the only one we have done since the start of the “Deepwater” program that makes any sense.

19 thoughts on “The Webber class WMECs”