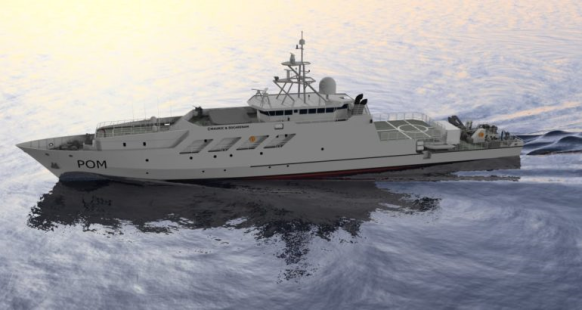 Naval News reports that the French Navy has ordered six Offshore Patrol Vessels (Patrouilleur d’Outre-Mer – POM). with the intention of basing two each in New Caledonia (Nouméa) and French Polynesia (Papeete) in the Western Pacific and la Réunion (Port-des-Galets) in the Indian Ocean.

The POM will have an endurance of 30 days without refueling. Each ship will accommodate a crew of 30 sailors and 23 passengers and operate an unmanned aerial vehicle. Their armament will include a 20mm caliber remote-controlled turret (Narwhal by Nexter), as well as 12.7 mm and 7.62mm machine guns. The POM vessel will be 80 meters (262.4′) long and 11.8 meters (38.7′) wide, with a draft of 3.5 meters (11.5′).  (I provided the conversion to feet–Chuck)

We talked about these ships and also discussed the French Navy’s coast guard type missions and other French OPV projects here. Incidentally all the previous reporting indicated that these would be 70 meters (230′) in length. These really do not look like 80 meter ships. I would prefer a flight deck and hangar suitable for a medium sized helicopter like on L’Adroit, but in any case, it is bigger and, at 22 knots, faster than a 210 with a crew less than half as large.

These ships certainly could be considered as candidates for “cutter X,” taking the crew and equipment of the Webber class cutters and putting them in a larger, more seaworthy hull. Looking at these new CGI images, they look like a supersized Webber class, with the gun on the main foc’sle just forward of the super structure and four crew served .50 calibers sited almost exactly as they are on the Webber class; a very similar 360 degree view pilot house mounted well back where it will experience less vertical acceleration; and a boat launch ramp notched in the stern. Taking advantage of the larger hull it also incorporates a davit launched RHIB starboard, space for a 20 foot containerized mission module, a flight deck and hangar for a 700-kilogram-class rotor-blade drone more berthing, and a holding area for up to six prisoners. 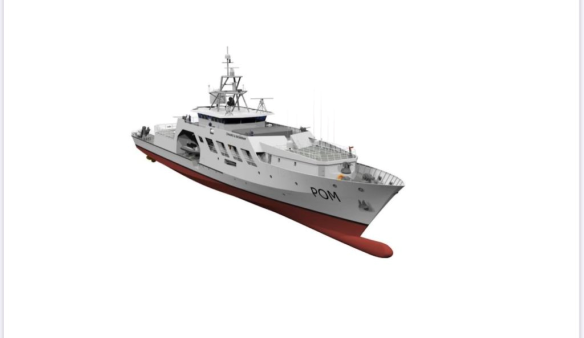 It is now extremely unlikely the OPCs will be obtained at the low price initially bid by Eastern. They are now seen to be as large as the Bertholf class National Security Cutters. Perhaps if we look ahead to the time when Polar Security Cutter funding will have been completed, we should think about building a true “bridge” between the over 4,000 ton NSCs and OPCs and the under 400 ton Webber class. We might choose to continue building one OPC a year and build three Cutter X for about the same price as a second OPC. We could replace the WMECs that much quicker and perhaps build to a total of over 50 truly ocean going cutters. (11 NSCs, 14 OPC, and 30 Cutter X for about the same price as 11 NSCs, and 25 OPCs)