gCaptain is reporting an oil well fire in the Gulf of Mexico, on a PEMEX rig, has killed four and injured several more.

No word yet on degree of polution or USCG involvement.

CIMSEC reports on the effects of tropical cyclone Pam on the archipelagic nation of Vanuatu in the South Pacific and the aid that is being given to the islands since the 165 mph storm hit the islands on 13/14 March.

Units from Australia, New Zealand, France, and the UK have been providing assistance. I was a little surprised there was no indication of help from the US military.

The 268,000 affected people are spread over 65 islands, with security experts likening it to dealing with 65 simultaneous emergencies. Furthermore, the difficulty of travel from one island to another makes it incredibly hard to compile an accurate picture of what the situation is.

There is also an update of the infographic depicting international assistance here.

Navy Times recently interviewed the Commandant. There is both a written report and a video interview, and in this case, the two are different, so you might want to look at both.

gCaptain reports the results of an Oxford Economics study on the economic value of the EU shipping industry.

Perhaps it is time we looked at what they are doing, that has resulted in this impressive growth. Maybe we should look to their industry (and their government regulation) as a model.

The Acquisitions Directorate has finally published a Request for Proposal for Construction of the remaining 26 of the planned 58 cutters of the Webber Class. Deadline for submission is June 5.

It appears this might have been done a year earlier. The Coast Guard awarded contracts to Bollinger for units 31 and 32 on 27 Feb 2015 that I don’t believe were options on the original contract. In fact the existence of options should not have precluded contracting with other shipbuilders.

I still must question why there was apparently no attempt to frame this as a Multi-Year Procurement (MYP) rather than a series of options. The Webber class were approved for “full rate production” 18 Sept. 2013. This is an ideal program for a Multi-Year Procurement that might have save more than 10% compared to exercising yearly options. Additionally it would have provided greater incentives for competition.

Coast Guard Commandant Adm. Paul Zukunft delivers his first State of the Coast Guard Address and outlines how America’s Coast Guard will meet the challenges of today while preparing for complexities that remain ahead. U.S. Coast Guard video by Telfair. H. Brown, Sr.

The Commandant has issued his State of the Coast Guard address, and I think you will find it well said, even inspiring. You can watch it above or read more here. 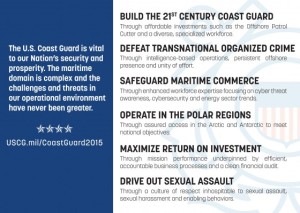 There is an upcoming event some of you might be interested in. It is the introduction of the new Navy/USCG/USMC strategy, “A Cooperative Strategy for 21st Century Seapower: Forward, Engaged, Ready”, slated for roll-out on March 13. Speakers include the Commandant, the Chief of Naval Operations, and the Commandant of the Marine Corps.

It will likely fill up quickly, so sign up soon if you want to go.

Anyone want to be my on-scene reporter?

Cdr. Salamander is reporting that Vice Admiral Thomas S. Rowden, Commander, Naval Surface Forces has issued a requirement that every surface force unit conduct live fire exercises every day underway. If exercises are not conducted he wants to know why.

The directive is very specific in including all weapon systems and providing an allowance for training rounds. Sounds like he is very serious.

1. ALL COMNAVSURFOR SHIPS WILL ENSURE THE HIGHEST LEVEL OF COMBAT READINESS. YOUR MAIN BATTERY, ALL CREW SERVED WEAPONS, SHIP/AREA DEFENSE SYSTEMS, AND ATFP WATCH STANDER QUALIFICATIONS AND PROFICIENCY WILL BE CAPABLE OF ENGAGING THE ENEMY AND DEFENDING YOURSELF AS WELL AS THE HIGH VALUE UNIT AT ALL TIMES. THE NAVY PROVIDES SUBSTANTIAL NCEA TO ENSURE WEAPON SYSTEM OPERABILITY, CREW PROFICIENCY, AND COMMAND AND CONTROL PROWESS IN ACCORDANCE WITH REFERENCES A THRU G. SO SHOOT, ASK FOR MORE, AND CONTINUE TO SHOOT IAW REFERENCES A THRU D IN ORDER TO MEET VALID TRAINING REQUIREMENTS. YOU, YOUR CREWS, AND ALL YOUR WEAPON SYSTEMS MUST BE READY TO FIGHT!
2. ALL SURFOR SHIPS ARE REQUIRED TO CONDUCT LIVE FIRE EXERCISES DAILY WHILE UNDERWAY UNLESS FOR SAFETY, OPERATIONAL, OR ENVIRONMENTAL REASONS YOU ARE NOT ABLE TO FIRE. SHORT OF THE REASONS LISTED ABOVE, I WILL ASSUME IF YOU ARE NOT SHOOTING EVERY DAY WHILE UNDERWAY IT IS BECAUSE YOUR WEAPON SYSTEMS ARE BROKEN OR THERE ARE SPECIAL CIRCUMSTANCES ON WHICH YOU HAVE PRE-BRIEFED YOUR ISIC AND IN TURN YOUR ISIC HAS BRIEFED MY CHIEF OF STAFF AND FORCE GUNNER.
3. IF FOR ANY REASON YOU CANNOT CONDUCT LIVE FIRE EVENTS ON ANY UNDERWAY DAY, A REPORT VIA E-MAIL IS DUE TO YOUR ISIC BY THE END OF THE DAY ON WHICH YOU DID NOT SHOOT. ISICS WILL CONSOLIDATE REPORTS AND SEND MY CHIEF OF STAFF ([redacted](AT)NAVY.MIL) AND FORCE GUNNER ([redacted](AT)NAVY.MIL) A BRIEF SUMMARY OF WHY THE SHOOT DID NOT OCCUR THAT DAY. IF YOUR OPERATIONAL COMMANDER LIMITS LIVE FIRE EVENTS, WE WILL COORDINATE SEPARATELY AND ACCORDINGLY IN ORDER TO SUPPORT HIS/HER INTENTIONS. A SUMMARY OF ROUNDS FIRED BY WEAPON TYPE WILL BE INCLUDED IN YOUR WEEKLY REPORT.
4. PER CIWS PACFIRE MIP 7112 MRC R-2M, FOR EACH PACFIRE EVENT YOU ARE REQUIRED TO SHOOT AT BOTH HIGH AND LOW BURST (ONCE EACH). THE PARAMETER IS FOR THE PAC BIAS (CODE 68 AND 69) TO BE 0 +/- 1 FOLLOWING EACH RATE OF FIRE. IF YOU ARE NOT WITHIN THOSE PARAMETERS, YOU ARE TO RE-SHOOT AT THAT RATE OF FIRE, NOT TO EXCEED
3 TIMES AT ONE RATE OF FIRE. PREVIOUS PACFIRE OFFSET VALUES ARE REQUIRED TO BE ENTERED PRIOR TO START, AND WILL RESULT IN PAC BIAS BEING WITHIN 0 +/- 1.
5. PER REFERENCES E, F AND G, CNSF WILL SUPPORT 300 ROUNDS PER MONTH PER MOUNT IN AIR MODE. AN ADDITIONAL 100 ROUNDS PER MONTH PER MOUNT FOR SHIPS WITH SURFACE CAPABLE (BLK 1B) GUNS TO FIRE IN SURFACE MODE. 1500 ROUNDS PER MOUNT PER YEAR FOR CE-12 AND AW-21, WHICH WILL ALLOW FOR THE PROPER EXECUTION OF THE PACFIRE REQUIREMENTS EXPLAINED ABOVE. YOU MUST REQUEST THIS NCEA AUGMENT 45 DAYS IN ADVANCE.
6. SHIPS THAT ARE EQUIPPED WITH TOWED ARRAY SONARS WILL HAVE THE ARRAY RIGGED FOR TOW AT EVERY AVAILABLE OPPORTUNITY. YOUR SONAR SUITE WILL BE MANNED AND TRACKING SURFACE AND SUBSURFACE CONTACTS BOTH PASSIVELY AND ACTIVELY WHEN THE TACTICAL AND ENVIRONMENTAL SITUATIONS ALLOW. NIXIE WILL BE STREAMED WHEN REQUIRED AND ALL SETTINGS WILL BE IAW THE TACTICS, TECHNIQUES AND PROCEDURES PROMULGATED WITHIN NTTP 3-21.33.
7. AS SPECIFIED ABOVE, THE COMMITMENT TO CONDUCTING LIVE FIRE EXERCISES ADDRESSED HEREIN IS APPLICABLE TO YOUR MAIN BATTERY, ALL CREW SERVED WEAPONS, AND ALL SHIP/AREA DEFENSE SYSTEMS. AS SUCH, IN ADDITION TO ALL MAIN BATTERY AND CREW SERVED WEAPONS AMMUNITION AND ORDNANCE, I EXPECT INCORPORATION OF THE FOLLOWING MUNITIONS INTO YOUR LIVE FIRE AND NCEA AUGMENT PLANNING: MK 214 SEDUCTION, AND MK
46 REXTORP.
8. RANGE CLEARANCE AND OVERALL WEAPONS SAFETY IS PARAMOUNT AS YOU TUNE YOUR WARFIGHTING SKILLS.
9. NCEA AUGMENTATION AND REQUISITIONING GUIDANCE. REFERENCES E, F, AND G GOVERN NCEA MANAGEMENT. NCEA AUGMENT REQUESTS MUST BE SUBMITTED NO LATER THAN 45 DAYS PRIOR. ENSURE YOUR WEAPONS OFFICER, GUNNERY OFFICER, LEADING GM, AND AMMO ACCOUNTANT HAVE READ AND UNDERSTAND THE NCEA PROMULGATION MSGS AND ARE IN COMPLIANCE.
10. THIS ORDER IS DESIGNED TO ENHANCE THE ACCURACY, PRECISION, SAFETY, EFFICIENCY AND CONFIDENCE WITH WHICH YOU PLACE ALL TYPES OF ORDNANCE ON TARGET. YOUR ABILITY TO MASTER THE MATERIAL, TACTICAL, AND WATCH TEAM PROFICIENCY REQUIREMENTS ASSOCIATED WITH CONDITION ONE WEAPONS SYSTEMS OPERATION IS FULLY IN LINE WITH OUR WARFIGHTING FIRST PHILOSOPHY. THE TACTICAL PROFICIENCY DEVELOPED THROUGH REPEATED LIVE FIRE EXERCISES FAR OUTWEIGHS ANY POTENTIAL MATERIAL CHALLENGES ASSOCIATED WITH INCREASED USE OF YOUR MAIN BATTERY, CREW-SERVED WEAPONS, AND SHIP/AREA DEFENSE WEAPONS.
11. COMMODORES AND COMMANDING OFFICERS ARE WELCOME TO CONTACT MY STAFF AT ANY TIME REGARDING THIS, OR ANY OTHER ISSUE.
11. WARFIGHTING WILL REMAIN OUR #1 PRIORITY.
12. VICE ADMIRAL ROWDEN SENDS.//

I still suggest looking at Cdr. Salamanders blog post and the comments you will find on it.

Makes me wonder how much live fire training the CG is getting (other than .50 cal.) and how ready we are to put steal on target.
\

We now have access to the proposed Coast Guard Budget for FY2016 in several levels of detail in the form of pdfs. These range from a one page “fact sheet” to over 500 pages of Congressional justification.

FierceHomelandSecurity, also gives us a quick overview including how it fits in the larger Department budget. The Department’s budget is up 7.3% while the Coast Guard budget is up by only 1.6%.

In support of the DHS’s strategic objectives, the FY 2016 Budget provides for the acquisition of six Fast Response Cutters, continues to invest in pre-acquisition activities for an affordable Offshore Patrol Cutter and funds vessel sustainment projects for two 140’ WTGB Icebreaking Tugs and a 225’ Seagoing Buoy Tender.  The budget also continues sustainment and conversion work on legacy fixed and rotary wing aircraft, missionization of the C-27J aircraft received from the Air Force, and investment in Command, Control, Communications, Computers, Intelligence, Surveillance, and Reconnaissance (C4ISR) systems.

It is a bit surprising that the cut in the AC&I account is not larger than it is, considering the Coast Guard is not ready to fund any new large ships in 2016. The NSC program is just finishing up and there is a small amount for that and some money to prep the OPC program, but no new starts for major cutters.

The six Webber class “Fast Response Cutters” puts the program back on track to continue delivering four per year since only two were included in 2015. This program will be with us until far into the future, with the last delivered in 2026 at the current rate.

Major Renovations for the 140 icebreaking tugs have already begun. The Acquisition Directorate, CG-9, is reporting work on the second vessel, Penobscot Bay has begun. Looks like C-27J integration is getting a boost.

I still wonder when we will start doing something about the inland fleet.

The Acquisitions Directorate is reporting purchase of equipment to complete the Nationwide Automatic Identification System. US regulations will require most vessels in US waters 65 foot and longer to participate.

This should be a boon to SAR. It has the potential to help the Coast Guard in many ways. Still we should not forget, the information is only as good as the cooperation of the participating vessels. Vessels that choose not to cooperate by either not transmitting, or by transmitting bogus data, for whatever reason, will either not show up at all or will be improperly identified.