The October issue of US Naval Institute Proceedings has an article advocating regular assignment of a Navy Underway Replenishment (UNREP) vessel to support drug interdiction operations in the Eastern Pacific. The authors are serving Coast Guard officers,

The article notes this would allow interdiction operations to become less predictable and would reduce time spent in transit to and from station. This could improve and speed handling of detainees. The unrep ships might even conduct some drug enforcement operations themselves.

The authors make a very good point, about the need for more underway replenishment ships,

“Some may push back against additional oiler deployments to SouthCom, citing a lack of available assets. But replenishment at sea—referred to as the Navy’s secret weapon by Admiral Chester Nimitz during World War II—will no doubt be foundational to any future conflict. If the Navy has too few assets to meet steady-state peacetime operations, how would it be able to support even short-term sustained combat operations in the far-flung corners of the globe?”

The title calls for an oiler (T-AO), but the article also mentions ” a T-AKE or allied oiler.” One of the Lewis and Clark class T-AKE dry cargo ships is actually a good option because, even though they carry only “limited quantities of fuel,” their 23,450 barrel capacity is enough to refuel a Bertholf class National Security Cutter more than four time from absolutely empty and they can simultaneously provide virtually every other type of stores that might be required.

Another way to achieve the same objective might be for the US Navy to transfer one or two Henry J. Kaiser class oilers to Colombia as they are replace by newer ships and work cooperatively with them.

I would note that, this would not only help Coast Guard cutters, it would also help Navy ships doing drug interdiction missions, which are typically Freedom class Littoral Combat Ships. They have far less range than the large cutter do. Allied vessels doing drug enforcement in the Eastern Pacific might also benefit.

Project 23130 is a series of medium-size replenishment oilers developed by the Spetssudoproect JSC and built by Nevsky Shipyard for the Russian Navy. (Picture source Nurlan Aliyev Twitter account)

NavyRecognition reports that the Russian Navy is building a fleet of six ice-capable underway replenishment tankers. The ships are relatively small,

“Project 23130 tanker has a displacement of 9 thousand tons. It is 130 meters long and 21 meters wide. The maximum speed is 16 knots. The autonomous navigation can last two months. The maximum range is 8 thousand nautical miles. The tanker can operate in 0.8-meter thick Arctic ice.”

But on the other hand the US Navy has nothing comparable.

The article also seems to point to a serious shortage of underway replenishment vessels in the Russian Navy. 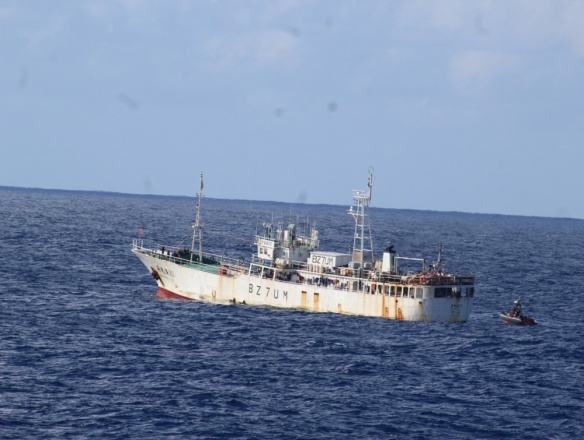 A boarding team from the Coast Guard Cutter Mellon (WHEC 717) approach a fishing vessel on the high seas in January 2019 while patrolling in support of counter-Illegal, Unregulated and Unreported fishing and global security missions. Mellon’s crew is supporting international fisheries on the high seas and enforcement of the Western Central Pacific Fisheries Commission (WCPFC). (U.S. Coast Guard photo by Coast Guard Cutter Mellon)

When I reported Betholf’s departure for the Western Pacific, Jan. 22, 2019, I speculated that after Munro’s visit to the Solomon Islands and Fiji, reported Dec. 8, 2018, that perhaps we were seeing the start of a new trend. Apparently I was a bit late in my prediction because, apparently Mellon had already followed Munro into the Western Pacific, departing Seattle shortly after Christmas. The CCGD14 news release below will explain.

Something else I noticed in the news release, was that while in Hawaiian waters, Mellon had conducted Astern Re-fueling-at-Sea training with the U.S. Coast Guard Cutter Joseph Gerczak (WPC 1126). We also had a report of an underway refueling of a Webber Class Cutter when USCGC Oliver F. Berry (WPC-1124) completed a 2,200 mile transit for Operations in the Marshall Islands. Could this be preparation for multi-unit operations in the Western Pacific? 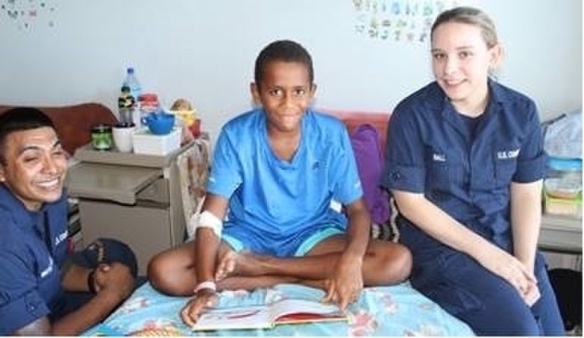 Crew from the U.S. Coast Guard Cutter Mellon performed two community outreach events while in Suva, Fiji, in January 2019. Children admitted at the Colonial War Memorial Hospital in Suva had the opportunity to meet with and hear stories from the crew during their community relations event at the hospital led by Petty Officer 3rd Class Sarah Patanapaiboon and the crew also refurbished the hospital gardens. (U.S. Coast Guard photo by Coast Guard Cutter Mellon)

HONOLULU — Following a stop in Fiji in late January, the crew of the Coast Guard Cutter Mellon (WHEC 717) continue their South Pacific patrol in support of counter-Illegal, Unregulated and Unreported fishing and global security missions.

The presence of a high endurance Coast Guard cutter conducting operations in the region demonstrates the U.S. commitment to regional partnerships and strengthening a coalition of like-minded countries to strengthen regional maritime governance and promote a rules-based regime for fisheries.

Mellon’s crew is supporting international fisheries on the high seas and enforcement of the Western Central Pacific Fisheries Commission (WCPFC). Upon arrival in the WCPFC convention area, they partnered with the Canadian Armed Forces who flew seven reconnaissance flights improving maritime domain awareness and aiding in the enforcement of the WCPFC convention. Patrolling over 1,110 square miles within the WCPFC convention area, the Mellon’s law enforcement team boarded two vessels, one fishing vessel and one bunkering vessel. Both boardings resulted in potential violations of conservation management measures including high seas transshipment and specifications for the marking and identification of fishing vessels.

“Participating in the WCPFC ties into a broader strategy the Coast Guard is pursuing in the Indo-Pacific region,” said Capt. Stephen Burdian, commanding officer, cutter Mellon. “Throughout the area, the U.S., and by extension the Coast Guard, is encouraging relationships respecting the sovereignty, supporting fair and reciprocal trade, and the rule of law in an open and free Oceania. Through a tactical lens, that strategy looks like a Coast Guard boarding of a foreign fishing vessel, while on the high seas or in a sovereign Exclusive Economic Zone (EEZ) jointly with a member of that country’s enforcement team. On this patrol, we are fortunate to have excellent support from the U.S. Navy, U.S. Marine Corps, and our Canadian counterparts.”

While on a port call in conjunction with the US Embassy in Suva, Fiji, the crew strengthened partnerships with Pacific Islands Nation communities by participating in community relations events at a local animal shelter, children’s hospital and garden.  At the animal shelter crew members engaged with kittens and puppies while giving animals baths and general clean-up of the shelter.  At the children’s hospital and garden, the crew read books to children and tidied up the garden area.

Mellon’s crew of 150 departed their homeport of Seattle shortly after Christmas. They made a brief stop in Hawaii for fuel and supplies. This stop was leveraged for training as the crew conducted Astern Re-fueling-at-Sea training with the U.S. Coast Guard Cutter Joseph Gerczak (WPC 1126). Also, they worked with Air Station Barbers Point crews to complete 72 shipboard helicopter evolutions over three days, resulting in the qualification of three M H-65 Dolphin helicopter pilots and 10 flight deck personnel aboard Mellon.  The cutter also embarked two Canadian Department of Fisheries and Oceans Officers, two U.S. Navy Aerographer’s Mates, and one U.S. Marine Corps Mandarin translator while in Hawaii for the upcoming operations. The crew is more than 8,000 miles into their patrol and have taken every opportunity for professional development with more than 40 crew earning new qualifications.

Oceania covers an area of 3.3 million square miles and has a population of 40 million and is home to some of our valued strategic partners in the Pacific Island Nations as well as Australia and New Zealand, with whom the U.S. has aligned for more than a century.

The importance of the Pacific Islands is very evident as the Coast Guard continues operations in the region and the U.S. strengthens partnerships with the governments of these nations. We recognize tourism and exports, both requiring a great deal of commercial vessel traffic, are a primary economic driver. Tuna represented a nearly $5 billion industry in 2015 with more than half the world’s tuna is sourced from the Western Pacific. In 2017 reported landings were 2.5 million tons of fish.

The presence of a high-endurance cutter in this part of the Pacific to enforce Conservation and Management Measures established by the Western and Central Pacific Fisheries Commission represents the U.S. and the Service’s commitment to our partnerships in the region. This body represents another essential collaboration. The WCPFC is an international body made up of 43 nations and international organizations. Members agree to allow the 13-enforcer nations in the pact to board and record any potential violations on their nationally flagged vessels. The findings go to the WCPFC who notifies the vessel’s flag state of the suspected infraction for further investigation.

“The U.S. Coast Guard and the Canadian Department of Fisheries and Oceans have a long history of working together to ensure the viability of fish stocks off North America.  Working with experts from Canada and regional leaders like Fiji is vital to ensuring food security and the rule of law in Oceania,” said Capt. Robert Hendrickson, Chief of Response for Coast Guard 14th District. “Working together we are helping to ensure a more secure, free and open Indo-Pacific.”