I was going to post this as a comment on an earlier post, but the pictures are too dramatic to miss. The Taiwanese and Japanese are taking this to new level. Take a look. 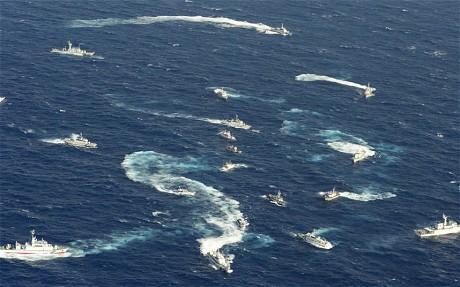 Up to six Chinese law enforcement agency vessels, roughly analogous to Coast Guard Cutters, have entered the territorial waters of islands administered by Japan, and Japanese Coast Guard Cutters responded. It does not look like the disagreement is going to go away quietly. Anti-Japanese anger is being nurtured in China. Both China and Japan are preparing for a leadership change, and no one wants to look weak.

A good summary of events is here. A second source indicates the Chinese have “1,000” fishing vessels en route.

“And, whether we like it or not, Washington is involved.“

The Chinese have taken an additional step and filed a claim on the islands with the UN describing its interpretation of where the baselines are drawn and enacted a national law that,

“prohibits foreign warships and vessels from entering the waters around the Diaoyu Islands without permission from the Chinese government.”

This seems to reflect China’s broader interpretation of the ability of a state to restrict access to its EEZ.

If the situation were not complicated enough, don’t forget there is a third party here, who are also inserting themselves in the mix. Taiwan also claims these islands and have also sent their Coast Guard into the area.

Photos of some of the players here.

Japanese Coast Guard in action against protesters from China and Taiwan, attempting to assert claim to Senkaku as Chinese territory.

Cimsec.org has the story and background.

The Taiwan Coast Guard, has just accepted two new major ships, the “Tainan” a 2,462 tons “frigate” and “Patrol Boat No. 7,” 1,845 tons. Both appear similar in configuration and capability to Japanese and Chinese Cutters–they appear to be made to merchant standards, and their armament is modest.

The Taiwanese President, Ma Ying-jeou, presided over the commissioning of the larger vessel. The “feel good” statements are here. A more forthright statement of their purpose is here.

The Taiwan (Republic of China) Coast Guard is a relatively recent addition, having been formed in 2000. They seems to have followed the USCG model in many respects.

The Taiwanese Coast Guard is charged with policing a total area of 540,000 square kilometers, which is 15 times larger than the island of Taiwan.

Taiwan is the third party in the dispute with China and Japan over the islands variously known as Senkaku, Diaoyu, Diaoyutai, or the Pinnacle Islands.

(This photo, found on the first link, shows a Taiwan Coast Guard ship that looks an awful lot like a 270.)

Japan, China, and Taiwan are in a dispute over islands that convey ownership of potentially oil and gas rich offshore areas. The Japanese Coast Guard finds itself in the middle of the dispute. In the latest move it looks as if the Chinese may be moving drilling equipment into the disputed area. This is on the heals of apparently more aggressive fisheries enforcement by the Japanese Coast Guard that resulted in two Japanese cutters being rammed and a Chinese vessel seized with its captain still being held for prosecution. Some additional background here.