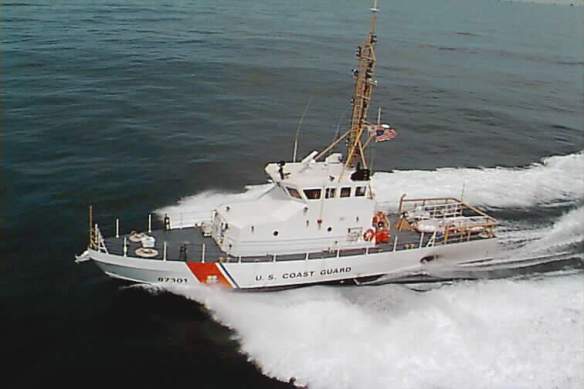 The oldest of the 87 foot Marine Protector Class WPBs is now 21 years old. It is not too early to start thinking about what will replace them. Of the 73 “Marine Protector” class patrol boats, Four were commissioned in 2008 and four in 2009, but the rest were commissioned 1998-2005. That means we really should see the first of the new class by 2023 (that is not going to happen) and certainly not latter than 2028.

We should expect these replacements to be larger, faster, and much better armed, but still about half the size of the Webber class.

Much has changed since the Marine Protector class was conceived. Our world in the last years of the 20th century, was really a very peaceful place. It was after the collapse of the Soviet Union, before the terrorist attack of 9/11/2001, and before the reemergence of Great Power competition. The Department of Homeland Security did not exist. The Russians seemed more friendly and their fleet appeared to be rotting away. The Chinese were trading partners and they were still militarily backward. It was a unipolar world. It now looks a lot less friendly.

Currently the Marine Protector class vessels are spread along the East, Gulf, and West Coast with none in the Ninth or 17th Districts and only one in the 14th District. In most places there is only one boat of the type, meaning at some times there is no ready WPB in that port, and it is impossible to maintain an immediate response capability.

Looking at the vessels that bracket the patrol boats in size, we have the Webber class WPCs and the Response Boat, Medium.

As noted, the “Fast Response Cutters,” unlike the 110s they nominally replace, are being used more like Medium Endurance Cutters at least in the Seventh, Eleventh, and Fourteenth Districts. Rather than sitting in port waiting for a call, they are out patrolling and are, in many cases, far from their homeports. It is not clear to me how much, if any, standby the Webber class are being assigned, but despite their larger number, it seems they will be assigned to fewer ports than the 110s they replace and so, to some extent at least, the WPB replacement may have to provide SAR coverage where the FRCs do not. In any case having a WPB replacement that approaches the capability of an FRC on standby, could relieve the FRCs of any need for short response time standby, allowing them more time to patrol.

At the small end, we have Response Boat, Medium. These boats appear both faster and more seaworthy than the 41 footers that were in place when the Marine Protector class were conceived. This should allow them to take on some of the less demanding duties the 87 footers were expected to handle when they were conceived.

This suggest that the replacement will likely push the capability envelop outward.

Assuming these are “Response” vessels, rather than patrol vessels, dash speed will be important. Speeds close to 40 knots are attainable and not unreasonable. It could probably be achieved in these smaller vessels using the same 20 cylinder engines used in the Webber class, perhaps even with the 16 cylinder version of these engines (about 9,600 HP total). The ship should also be able to maneuver smoothly at slow speeds. Slow speed maneuvering has presented some challenges on both the 110s and the FRCs. A hybrid powerplant could facilitate that and allow long slow cruises as well. Another way to do this might be using two significantly smaller diesels for cruise augmented a small gas turbine using a centerline waterjet for sprint speeds, for instance a pair of 3000 HP diesels and the GE LM500 (6,130HP).

While our vessels have increased in size substantially, the crew size has increased no more than about 50% if at all. NSCs actually have smaller crews than the WHECs they replace. The OPCs’ crew size will probably be similar to that of the 270s and less than 50% larger than that of the 210s. The FRCs’ crews are about 50% larger than those of the 110s. The crews of the 225 foot WLBs are considerably smaller (50) than those of the 180s (80). The Coast Guard will want to avoid the additional cost of a substantially larger crew even if the vessel is larger and more capable. The crew, assuming it is conventionally manned, is unlikely to be larger than 15 and might be as few as 10, but I would expect the CO to be an O-3. In any case the Coast Guard will want additional berthing available. (Additional explanation below as to why the crew might be as large as 18.)

The 87 footers have a nominal range of 882 miles at 10 knots and a five day endurance. This is considerably less range, but the same endurance as the FRCs (5 day endurance/2500 mile range at 14 knots). The Island class were also rated to have a five day endurance and, in fact, a greater range than the FRCs. Given what I see as the likely missions of the class, a five day endurance is probably more than adequate. I would expect they might be required to sprint out 200 to 300 miles at 30+ knots, loiter for perhaps 24 hours, and then return to port at cruise speed, or possibly with a vessel in tow.

The 8 meter over-the-horizon boat and a stern ramp like that on the Webber class would probably work here as well.

This is the area that will require a departure from the thinking behind our previous 82 and 87 foot patrol boats. The Homeland Security mission requires that the Coast Guard be ready to immediately counter any unconventional maritime attack. I interpret this, as a need to be able to destroy or at least forcibly stop any vessel, no matter how determined the crew may be to resist, and no matter how large, fast, or maneuverable the vessel may be. We need to be able to deal with small fast highly maneuverable vessels, medium to large merchant ships and everything in between.

We are not prepared to do this.

This class is unique in that, of all the classes of Coast Guard vessels, it is most likely to be both available to immediately respond to attack on its homeport while being large enough to mount the weapons needed to counter the full range of threats.

In almost every port we have vessels that are equipped with 7.62mm and .50 caliber machine guns, but while these may be sufficient to dissuade law breakers without ever firing a shot, they are probably insufficient for dealing with any but the most modest terrorist attack that might be delivered by suicidal crews, using heavier weapons, and vessels of almost any size.

The 25mm ups our game a little, but it, like the machine guns, has the potential of spreading collateral damage. It would also have limited utility against targets much larger than a small boat, although use of the APDS (armor piercing discarding sabot) round (basically a non-explosive, sub-caliber arrow of very dense material) would increase its penetrating power.

Our 57mm guns are decent anti-aircraft guns, but they are very light for dealing with surface targets. None of the ships equipped with 57mm (or 76mm) maintain standby in port, and when they get underway they do not hang around the ports that we might want to protect.

To deal with the range of potential threats, I would suggest, in addition to a gun (presumably the 25mm Mk38 mod2/3), we need to arm the class with Hellfire to deal with small, fast, highly maneuverable targets and either Naval Strike Missile or light weight torpedoes to deal with the larger targets. Lest I be accused of overloading these vessels with weapons let me point out that vessels of similar size have been equipped with a 40mm gun, six anti-ship missiles, two heavy weight torpedo tubes, and small anti-air missiles. 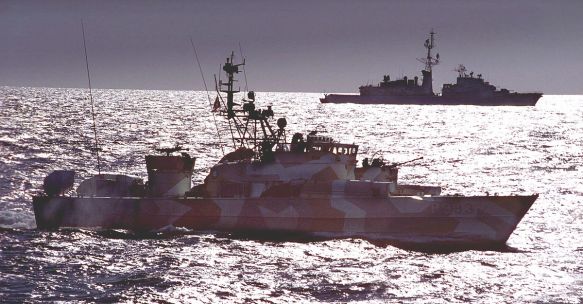 There are other missiles that might be considered, but Hellfire has been selected for the LCS and the planned FFG. They are produced in very large numbers. Hellfire could be effective against vessels up to about 100 tons and multiple hits have at least a small chance of disabling much larger ships. It should be possible to have the Hellfires mounted on the Mk38 mod2/3, if not a small footprint vertical launch system should be possible. This is #1 on my wish list.

This is again a weapon selected for the LCS and FFG. It has very long range, over 100 miles, but it would take a lot of coordination to provide the targeting to exploit its range. It is a relatively small anti-ship missile so it might not actually stop large targets. Multiple hits would of course help, but I doubt we would have more than two mounted on the WPB replacement, although they could likely mount four.

We could probably place two light weight torpedo tubes on this class in a manner similar to my suggestion for mounting on the Webber class without a great deal of impact on the design of the WPB. Like the NSM this is not a weapon that will sink a large ship, but, hitting below the keel, preferably homing on the propellers, it is more likely than the NSM to effectively stop even a very large ship. For this reason, I favor it over the NSM. Also it would, in most cases, sink ships of up to about 1000 tons.

If we want to have at least one of these on immediate standby in every major port, we will need to man and operate them differently in terms of basing and manning. We could base them in pairs and have each crew split into blue and gold teams, either of which could operate the ship and its weapons for short periods, say 24 hours. The ships could swap off standby duties to allow maintenance stand-down. With a crew of 16-18, each blue and gold team could consist of eight or nine members each team headed by a command qualified Lieutenant. This could allow two four-person watches or three three-person watches depending on the requirements of the ship. The Officer rotation might be over two years, with the incoming officer serving first as both XO and head of his underway team. After a year this officer would fleet-up to the CO slot. Newly arrived XOs would have to join the ship during its down time and complete underway familiarization on a sister ship to ensure that when the ship rotates to standby status, both officers are capable of taking her out.

These ships might also be of interest to the Navy and could be offered to other nations as well through Foreign Military Sales.