“According to information published by the US DoD on November 17, 2022, the Legend-class national security cutter (NSC) USCGC Hamilton (WMSL 753) arrived in Riga, Latvia for a port visit…Prior to arriving in Riga, Hamilton conducted multiple operations with allies and partners in the Baltic Sea, including a series of at-sea engagements with Swedish, Finnish, Estonian, and Lithuanian maritime and naval forces.”

Naval News reports that the first of six Trapper class fast patrol boats has completed an upgrade that will allow these small vessels to hunt submarines. At 62 tons full load, these vessels are about 2/3s the size of the Coast Guard’s 87 foot Marine Protector class WPBs (91 tons).

Sweden has a history of suspected or known intrusions by submarines, midget submarines, and/or swimmer delivery vehicles, presumably from the Soviet Union/Russia.

What they seem to have done here is to use technology similar to the Sono-buoys used by airborne ASW units. While surface units do not have the speed of aircraft in getting to the scene, they are potentially more persistent, and because the buoys themselves do not have to fit within ejection tubes, they can be made larger with batteries that provide longer life. 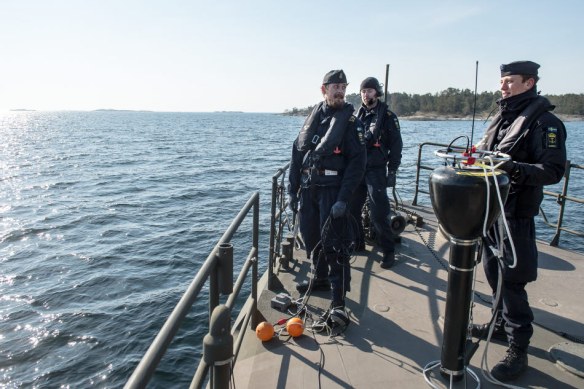 The post makes no mention of weapons or hull mounted sonars. When built in the 1990s, this class, originally of twelve vessels, based on a Swedish Coast Guard vessel design, had a searchlight sonar and small Anti-Submarine mortars that went by the designation RBS-12 or ASW600. The mortar projectiles were relatively small, only 100mm (3.95″) in diameter, weighing 4.2 kilograms (9 pounds 4 oz.), far smaller than the 65 pound (29.5 kilo) Hedgehog or Mousetrap weapons of WWII, but, unlike those systems, they did have a shaped charge. Apparently the weapon was removed at some point, but reportedly the weapon was reintroduced in 2018 on the Koster-class mine countermeasures vessels so it is possible it has been reintroduced here as well. 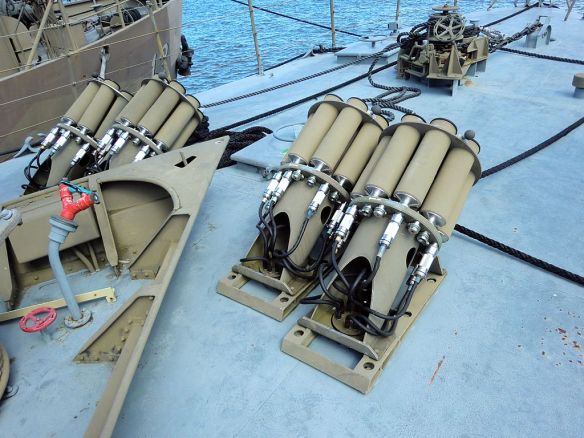 While the post seems to emphasize passive detection, the last paragraph suggest there is an active component.

“The Kongsberg Maritime sonar selected for this upgrade is being used for Anti-Submarine Warfare (ASW), Mine and Obstacle detection and Navigation (emphasis applied–Chuck), and is designed for use in shallow water.”

“Cdr Salamander” provides an intro to the publication on the US Naval Institute Blog.

Unfortunately I did not see anything about the Russian Coast Guard in my initial scan of the document. It is a not insignificant force.

On page 5, where you see the 1000 mile rings that the document suggest the Russians have a special interest in, you might notice that one includes most of Alaska.

It is a nice, readable update. 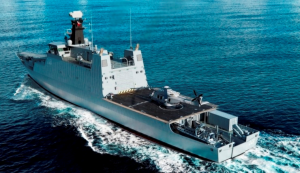 Poland is planning some ships that have many similarities to the Offshore Patrol Cutters. We have talked about these a little already, in the context of an unconventional hull form offered by ThyssenKrupp Marine Systems (TKMS) that promises better fuel economy. Our friend at Thinkdefence talks about another proposal from Rolls Royce. He also provided a link to a more detailed description of the program.

The intention is apparently to produce three “Miecznik” corvettes and three “Czapla” patrol ships (with mine countermeasures) with the two classes sharing a common platform. ThinkDefence reports the key features of Rolls Royce’s corvette version as follows:

“It is 99.7 metres long and displaces just over 2,400 tonnes. Accommodation for 60 crew and an additional 30 personnel is included and the ship is said to have a 28 day endurance. With a CODLOD propulsion system its design top speed is 25 knots. Weapons and sensors include a 76mm Oto Melara gun, twin MSI 30mm automatic cannons, two quad NSM missile launchers, MU90 torpedo launchers and four Sylver A35 cells for quad packed VL-MICA anti-aircraft missiles; Smart-S 3D radar, Thales optronic systems and Kingclip sonar.”

Substituting some equivalent US systems, I think that would represent a good approximation of how a war ready OPC might be equipped.

Apparently they intend to order one ship a year beginning with the corvettes in 2017. That starts them on nearly the same schedule as the OPCs. Which will be finished first? Unfortunately the Poles will probably see their first ship before we see the first OPC.