Below is a D14 news release. Congratulations to the crew of the Oliver Henry. 10,620 nautical miles, a drug seizure, and a SAR case enroute. Sounds like quite an adventure. I’m sure CWO Henry would be proud.

I learned recently that the Navy expects to decommission their 13 Cyclone class patrol craft in FY2021. This is significant for the Coast Guard for a couple of reasons.

The three based in Mayport have consistently been used to augment Coast Guard vessels, hosting Law Enforcement Detachments for drug enforcement (a recent example). .

Second, these vessels frequently partner with Coast Guard patrol boats of PATFORSWA based in Bahrain. Their decommissioning may put a greater load on the Coast Guard unit as it begins to receive Webber class as replacements for the existing six Island class patrol boats.

For the Island class cutters in the Persian Gulf, the Cyclone class have served as better armed, big brothers, adding a bit of muscle to escort missions where Iranian Fast Inshore Attack Craft might be encountered. While the Webber class, that will be replacing the Island class, are a bit better armed than the 110s, unless they are extensively modified, they will not come close to replacing the missile armed Cyclone class. LCS are supposed to replace the Cyclone class, but they still have not demonstrated the ability to sustain a reasonable number of vessels in a remote theater. LCS are also too large to go many of the places the Cyclone class were able to.

These little ships have seemed to count for very little to the Navy. Regularly we see a count of “Battleforce ships”“Battleforce ships” that includes everything from aircraft carriers down to civilian crewed, unarmed fleet tugs (T-ATF), salvage ships (T-ARS), and high speed intra-theater transports (T-EPF, really aluminum hulled, high speed ferries). The Cyclone class were only included in the count one year (2014), so their loss will be largely invisible. (Significantly, this count of what many must assume is the National Fleet also makes no mention of Coast Guard assets either.)

Until ten of the class found a home in Bahrain, the Navy seemed to have had a hard time figuring out what to do with them. Originally intended to support the special warfare community, they were considered to large for that mission. Of the original fourteen one was transferred to the Philippine Navy. Five had been temporarily commissioned as Coast Guard cutters.

Other than the far larger LCS, the navy has no plans to replace these little ships, that have reportedly been the busiest ships in the Navy.

In 2012 the US Naval Institute published an important article by then CNO Admiral Johnathan Greenert, “Payloads over platforms: Charting a new course.” It starts off,

“We need to move from ‘luxury-car’ platforms—with their built-in capabilities—toward dependable ‘trucks’ that can handle a changing payload selection. “

–
He suggested that the Navy needs F150 pickups rather than Ferraris. Metaphorically the Webber class could be the Navy’s small Toyota pickup–cheap, reliable, versatile, and economical to operate.
–
A strong point for the Webber class is that it is probably the smallest and cheapest combatant, being currently manufactured, that can self deploy anywhere in the world (other than the polar regions) with minimal support en route as demonstrated by their self deployment to Hawaii and Alaska and USCGC Olivier F. Berry (WPC-1124)’s successful patrol to the Marshall Islands, 2200 miles from her homeport in Honolulu.
–
As currently equipped there is not a lot of free space apparent on the Webber class, but removing the eight meter “over the horizon boat” would free up a large area where mission modules could be placed. We can think of it as the bed of the pickup. 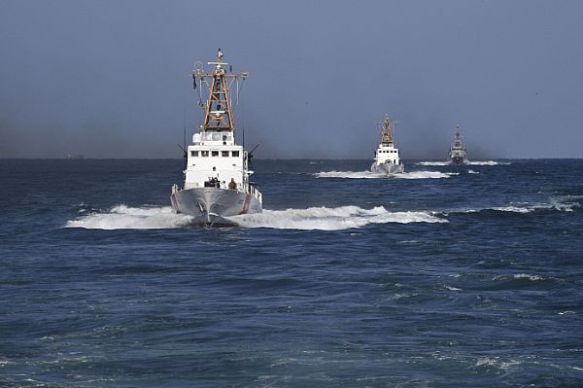 Potential Missions
Countering the Swarm:
The Navy’s most likely first use of a Webber class could be as replacements for the Cyclone class in South West Asia. Countering the large number of Iranian fast inshore attack craft (FIAC) is a mission the Cyclone class is expected to do now, protecting both larger Navy vessels and the tanker traffic that must pass through the Straits of Hormuz.

An earlier post, “Modifying Webber Class Cutters for Duty in SW Asia,” was aimed at this threat as applied to the Coast Guard Webber class that will be going to Southwest Asia. As a minimum the Navy will likely want some form of guided weapon, Perhaps the APKWS would suffice, if provided in sufficient numbers. 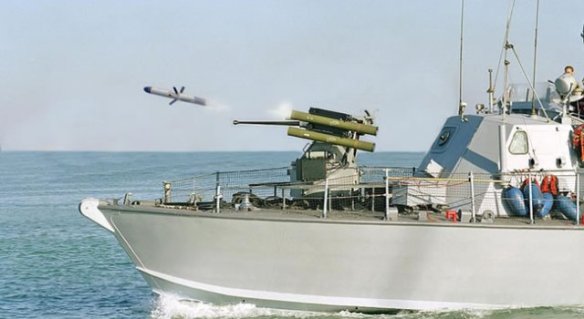 Spike LR Missile launched from a Typhoon weapon station on an Israel Navy Super Dvora Mk 2. A similar configuration was recently tested by the US Navy, from an unmanned surface vessel (USV-PEM). Photo: RAFAEL

The 25mm Mk38 Mod2/3 that are currently mounted on the Webber class might be up-gunned (30, 35, and 40mm guns are all possible) and the mount might also be modified to also launch APKWS. Alternately the Mk38 might be replaced by BAE’s 40mm/70 MK4 and the Toplite gun director c(urrently mounted on the Mk38) could be mounted on the mast to control the 40mm, as the Israelis have done with some of their installations of the system, assuming the 40mm Mk 4 does not weigh too much.

Optimally, the outfit should include Longbow Hellfire. It could probably be mounted as single tube launchers affixed along the sides of the superstructure. I have seen a mockup of such a launcher. The missile itself is only about seven inches in diameter. If willing to replace the boat with missiles, its likely Lockheed could produce a 12 round launcher based on half the launcher being installed on the LCS.

ATLANTIC OCEAN—A Longbow Hellfire Missile is fired from Littoral Combat Ship USS Detroit (LCS 7) on Feb. 28 2017 as part of a structural test firing of the Surface to Surface Missile Module (SSMM). The test marked the first vertical missile launched from an LCS and the first launch of a missile from the SSMM from an LCS. (Photo by U.S. Navy)

Anti-Ship:
In other theaters there is likely a desire to have a larger anti-ship missile.
The Navy has been talking a great deal about “Distributed Lethality.” The concept has its origin in a January 2015 US Naval Institute article by then-Director of Surface Warfare Requirements (OPNAV N96) Rear Admiral Tom Rowden, RAdm. Peter Gumataotao, and RAdm. Peter Fanta.
Rowden’s co-author and successor at N96, Rear Admiral Pete Fanta, continued the drum beat with the memorable phrase, “if it floats, it fights,” suggesting that anti-ship missiles should be put on virtually all units.
–
On the Webber class, this would most likely the Naval Strike Missile (NSM), recently chosen by the Navy to arm its LCSs and frigates. A four cell launcher could probably replace the boat. The missile is only 13 feet long. 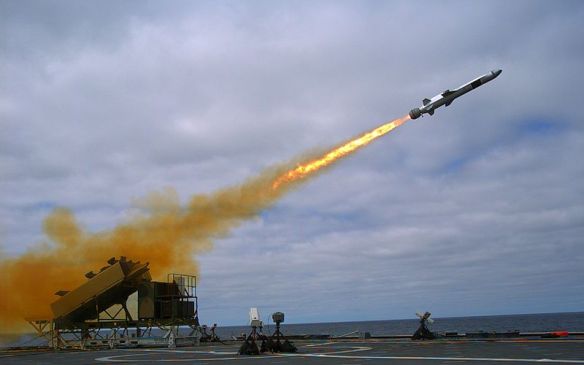 Missile Truck
The Army and Marines have tracked and truck mounted missile launchers.
A new missile, “Deepstrike,” is being developed for these launchers. “The missile will be able to strike targets up to 309 miles away with precision, including moving targets both on land at sea.” (see also)
A Webber class equipped with these could function in the same way as the Army and Marine vehicles operating in the littorals and many river systems. Targeting would be provided by offboard sensors through networking.
–
Anti-Submarine Warfare (ASW)
–
This is probably unlikely, but there might be a place for craft that could perform ASW patrols off ports and amphibious objective areas or around choke points.
The Canadians have a small containerized towed array sensor that looks like it would fit.

I have looked at how we might add torpedo tubes to the Webber class that could launch ASW torpedoes, but it is more likely aircraft, most likely helicopters, would be called in to make the actual attack. The ship would be primarily a sensor node, minimizing the requirement to keep ASW Helicopters airborne.
–
–
120mm Mortar for Naval Surface Fire Support:
–
Another truck like use would be to add this containerized large mortar as a way to provide naval fire support. This weapon is not currently in the US inventory but it does look promising. Guided projectiles are being developed for the 120 mm mortar.
–
Security for MSC’s PrePositioned Afloat Fleet

I am not sure what precautions the Navy has made to protect the ships of the MSC’s PrePositioned Afloat Fleet, but if I were an enemy there are might be strong incentive to destroy these ships that transport the most ready reinforcements of heavy equipment.

Webber class PCs might have a role in protecting these.

Large Unmanned Surface Vessel.
The Navy is seeking to procure a medium unmanned surface vessel (MUSV), 12 to 50 meters in length. The Webber class might be the basis for such a vessel. The modular systems described above might also be used on the MUSV.
–

Visit, Search, Board, and Seizure:

This is the mission these little ships are built for and, consequently, no change may be necessary. The mission might be stopping and boarding hundreds of small craft as was done off Vietnam as part of Operation Market Time, or it might be enforcing a blockade against Chinese shipping at the Straits providing access to the South China Sea. If resistance is expected there are a number of ways the vessels’ armament could be augmented, including missiles or torpedoes, but in most cases its likely air or backup could be called in. The real advantage is that the Navy would not need to tie down DDGs doing this work, and potentially risk it being damaged by improvised weapons on a vessel being boarded. For more challenging assignments two or three could be teamed with one or two providing boats and boarding teams and the other as a weapons carrier.

DefenseNews reports that the 30 January attack on the Saudi frigate, previously reported as a suicide attack, was actually done using unmanned, remote-controlled boat filled with explosives.

The story makes it sound like this is hard to do, but in fact it has become very simple just as has the use of hobby drones.

“Donegin is concerned “first that it is in the hands of someone like the Houthis. That’s not an easy thing to develop. There have been many terrorist groups that have tried to develop that, it’s not something that was just invented by the Houthis. There’s clearly support there coming from others, so that’s problematic.”

What does it require? I presume this boat had no real autonomy, that it was simply radio controlled (RC). Presumably it was supported and controlled by the boat from which the Houthi rebels filmed the attack.

Steering a collision course may be difficult from a half mile to a mile away, but it can be simplified by mounting a camera on the RC boat and broadcasting the picture back to the controlling boat. Then all you need to do is keep the target in your camera’s field of view and close the range to zero.

Theoretically it is relatively easy to disrupt the radio control and television links, but unless you anticipate the need it won’t happen.

We know these remote control boats are not easy to stop because the “swarming boat,” remote control targets we use take an awful lot of punishment and can seem impossible to stop.

If you are a terrorist, you can also make the boats very hard to sink by putting the explosives and critical components low in the boat and covering them with a steel plate. Laid near horizontal the steel plate would deflect small arms and resist fragment. Follow that up with liberal use of expanding foam filler to maintain flotation.

Unfortunately, it is just not that hard.