Not that I think it is going to happen, but Forbes has a proposal, “Now Is The Perfect Time To Sink The Freedom Class Littoral Combat Ship,” by Craig Hooper. He suggests the Navy end its long embarrassing association with the Freedom class LCS, handing them over to Foreign Navies who might be able to use them. The Navy could then accelerate introduction of the new FFG that are to be built at Marinette which is currently building the Freedom class. If we really need more LCS, we could continue construction of Austal’s more successful Independence class. or

“Alternatively, the Navy could fund a smaller, simpler patrol boat. The U.S. Coast Guard’s cost-effective Sentinel class Fast Response Cutter is already in the field, demonstrating value every day—with about 40 already in service, these reliable, 154-foot ships are doing everything that the Freedom class vessels are not. Sentinel class Fast Response Cutters are deploying throughout the Pacific, forward-basing in Hawaii and Guam, and 6 of the ultimately 64-hull fleet will soon operate out of Bahrain. They may even be based in deepest parts of the American Pacific, operating out of American Samoa. A navalized version of this useful patrol ship—potentially leveraging the powerful F-35 radar system and other useful, off-the-shelf systems—can be whipped up in almost no time, quickly replacing the Freedom class ships currently based in Mayport Florida with a lower-cost, more functional and more strategically-useful platform.” 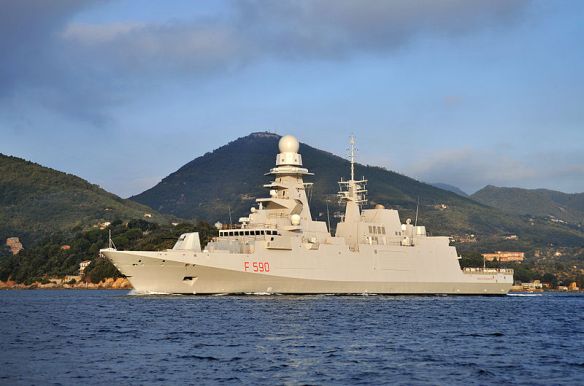 Italian FREMM Bergamini. photo by Fabius1975–no its not going to look like this

The US Naval Institute has a one page description of the new Navy frigate in the July 2020 issue of Proceedings, including a nicely annotated side view of the ship (you can see it here). Other than the diagram and the intro, the article is behind the paywall. It not only illustrates how the ship is equipped, it also explains the differences between the US version and the Italian version. I will summarize and include some observations.

The already large FREMM frigate grows to 7,400 tons and 496 feet in length, an increase of “more than 500 tons” (700 tons according to Wikipedia) and 22 feet in length. Draft is reduced from 24 to 23 feet, but only because there is no bow mounted sonar, so the draft over the rest of the hull is likely greater.

This large size appears to open the possibility of a smaller combatant class of 2,000-4,000 tons which might be dual service (Navy/Coast Guard) ships, or perhaps simply an upgraded Bertholf class.

It appears the power plant is much the same as the Italian version, combined diesel electric and gas turbine. In the Italian ships, that consists of four diesel generators totaling roughly 15,000 HP, two electric propulsion motors totaling 5 MW or about 6700 HP, plus an LM2500 gas turbine rated at 32 MW or about 42,895 HP. The combination is reportedly good for more than 30 knots in the Italian frigates and the US version should not be much different despite the increase in displacement. The USNI report claims only a sustained speed in excess of 26 knots. I would note that this is slightly less total horsepower than the National Security cutters.

The one characteristic of the design that gives me pause is the cruise speed. For the Italian frigate the reported max is 17 knots, limited by the power of the electric motors. The USNI article reports a cruising range of 6,000 nmi at a speed of 16 knots in electric mode. These ships are likely to, at some point, perform escort duty for convoys or amphibious ready groups. Many modern merchant ships and all amphibious ready group ships can maintain 20+ knots. It is entirely possible that they may need to escort convoys with a base speed of 18 knots or more, which would require them to operate almost continuously on their one turbine engine which would seriously degrade their range. It is possible they have included higher power electric motors which might allow a 20 knot cruise, but there has been no indication of this. When escorting an aircarrier, they would be expected to operate on turbine virtually al the time, but in that case at least a tanker can be expected to be near by.

The systems reported on the new frigate include:

Construction is expected to begin in 2022, first of class delivery 2026, and Initial Operational Capability (IOC) 2030. Apparently this is a contract with options for out years rather than a “Block Buy.”

Late Addition: Contrary to what I think I remember about the supposed equipment, there was no mention of vertical launch Hellfire. Notably there are none of the weapons normally associated with dealing with swarming high speed inshore attack craft e.g. no 25mm Mk38 and no 30mm Mk46, which seems surprising. Also don’t see a position that seems likely for a laser weapon, unless it is the small area elevated one deck forward of the RAM launcher and aft of the stack.