These two photos which accompany the post appear to be of the same tank but taken from opposite sides.

MyCG has as post about the increasing use of Unmanned Air Systems. In this case primarily concerning the use of small commercially available systems. Take a look.

gCaptain has a significant editorial that questions the Coast Guard’s plan for the grounded car carrier Golden Ray. This is not in my wheelhouse, but sounds like they have valid reservations about the proposed method of salvage and its possible adverse environmental impact. (OPA-90 is the Oil Pollution Act of 1990.)

“This is OPA 90’s biggest test ever. The question is, will the United States Coast Guard allow OPA-90 to be manipulated by responsible parties? Will they rewind the clock to the days before Exxon Valdez when polluters managed their own environmental disaster recovery efforts?”

Above is the video of the Senate Subcommittee hearing for which I provided the Commandant’s prepared remarks earlier.

Participating Senators I noted were:

You can also check out the original post from the Senate Committee on Commerce, Science, and Transportation. (Same video is available there, but the meeting does not actually start on that version of the video until minute 36.) There you can also find the written statements of the other three witness who constituted the second panel. The Commandant was the sole witness on the first panel.

This hearing was reputedly about how the Coast Guard had been impacted by the unusually severe Hurricane season. There is not a lot new here but there were some interesting remarks.

The intention is to Contract for the first Icebreaker and then employ block buy for the next two (28m). To me this seems to negate most of the advantage of a block buy. I don’t believe we will or should buy one and then wait until we have tried it out before contracting for the next two. That would necessitate a delay of at least five years during which we would still have the nightmare scenario of our only heavy icebreaker having no rescue if it should break down in the ice–certainly not an impossibility even with a new ship. If we are going to contract for the remaining two before testing the first, we might as well block buy all three.

First of class is always the most expensive. If the shipyard gets a block buy they know that initial improvements in productivity can be amortized over the entire block buy quantity. In some cases, in order to win the whole project, the shipyard will cut the price of the first ship substantially knowing they will make a profit over the entire project.

If we buy one and then block buy the second and third, we have paid for improvements to the winning yard with the first contract and minimized the chances for a competitive bid for numbers two and three.

There was a lot of discussion about the need to have the Coast Guard Authorization Bill signed into law, still not approved. You can see it here.

There was a discussion of the high cost of the Coast Guard response to the recent series of Hurricanes.

Representative Sullivan spent a lot of time, discussing and advocating for an eleven mile road from King Cove  (population estimate–989) to Cold Bay, Alaska (population estimate–122) which has an all-weather airport with two runways, one 10,180 feet and one 6285 feet in length. The Coast Guard connection is that the road would minimize or eliminate the necessity for the Coast Guard to Medivac emergencies from King Cove by helicopter, which is frequently hazardous. It is a Federal issue, because the road would run through a Federal reserve. The Commandant fully supported the desirability of completing the proposed single lane gravel road as a means of minimizing the requirement for helicopter medivac.

28m Domestic icebreakers–Design work on new domestic icebreakers is expected to start in 2030. That sounds a bit late to me. Mackinaw was commissioned in 2006 so if that is what he is really talking about, that makes sense, but the 140 foot icebreaking tugs are a different story. The first for of these will be 51 years old in 2030. More than  half of them have already completed in-service which was expected to add 15 years to their service life. Morro Bay, at least, is expected to reach the end of her service life in 2030, and considering how long it takes us to build a ship we really need to start the process not later than 2025.

45m Western Pacific Fisheries Protection–They have not seen much risk of Illegal, Unregulated, or Unreported fishing.

56m We may need to replace the 52 ft MLBs with something larger than the 47 foot MLB sometime in the future, but their end of life is not yet apparent

60m Sexual Assault in the CG

1h08 CG center of expertise, particularly in regard to clean up spills in ice and fresh water

© National Geographic Stock/ James P. Blair /WWF (Note, this may or may not be the facility in question–Chuck)

“Italian oil producer Eni this week began drilling a new well in U.S. waters off the north coast of Alaska, becoming the first company to do so since 2015, federal regulators said on Wednesday.
“The oil and gas firm is working from an artificial island in the Beaufort Sea about three miles off Oliktok Point in the Arctic Ocean…The project could result in 20,000 barrels a day of oil production…”

–
This should add urgency to research into dealing with oil spills in the ice covered water. Perhaps also more justification for revitalizing the icebreaker fleet.

This is all I have, from the German Navy Blog, “Marine Forum,”

Surely, we will hear more.

It looks like the Healy has been having an interesting voyage. They had aboard a team from the Research and Development Center that were aboard to try out some new technologies.

Here you will find a listing of what they hoped to do while aboard. Projects included.

A later post shows how it turned out–lots of photos. It is presented in reverse chronological order, August 6 to July 21, so you might want to read it from bottom up. 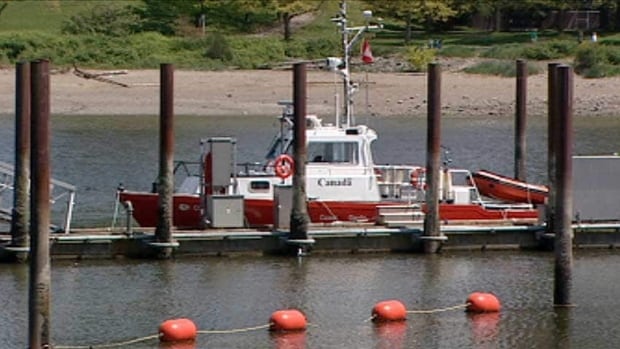 Rescue boat sits moored at the Kitsilano Coast Guard station before the base’s closure in 2013.

Our Canadian counterparts are looking forward to an 11% expansion over the next two years. This is a part of the Canadian government’s $1.5B (Canadian) Ocean Protection Plan that will include new vessels and new lifeboat stations.

The Ocean Protection Plan appears to be a response to late or less than satisfactory response to pollution incidents.

Marine Log reports recognition of “OV Bøkfjord as the Danish Ship of the Year 2016.”

OV Bøkfjord is multifunctional with the ability to operate as both a buoy and beacon maintenance vessel on a daily basis, as well as an oil recovery vessel for Kystverket in Norway.

It is designed for fast response time and fitted with specialized equipment, i.e. surface oil skimmers and dedicated holding tanks, etc. The vessel has an advanced diesel-electric hybrid propulsion system integrated into the vessel’s compact design.

“We’ve developed a complex ramp system allowing the vessel to approach smaller islands and also to use the ramps for dynamic positioning during repairs at sea. These, as well as oil sweepers, holding tanks, offshore crane etc., have been integrated in the design whilst also making space for a battery pack, as Kystverket wanted the vessel to have diesel-electric hybrid propulsion.”