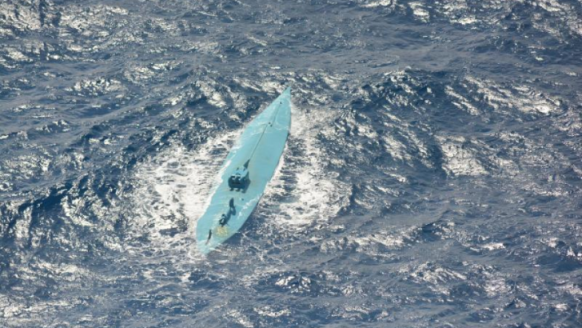 Quoting one of the articles below, “© U.S. Customs and Border Protection, Military intercepted a self-propelled semi-submersible vessel loaded with more than 3,800 pounds of cocaine right outside U.S. borders.”

I have seen a couple of articles lately that claim a self propelled semi-submersible was seized off Texas.

The first was, “Self-Propelled vessel intercepted smuggling more than 3,800 pounds of cocaine near Texas”

According to the U.S. Customs and Border Protection (CBP), on November 13, CBP and Marine Operations (AMO) arrested the crew during operations in international waters (I don’t think this could be true–Chuck), and all three suspects will face charges in the U.S.

“Interdicting self-propelled semi-submersible vessels requires expertise and the right aircraft. Air and Marine Operations will continue to beat the cartels at their own game to protect our borders.”

The multi-day operation from surveillance to interception, according to CBP, involved several interagency partners including the U.S. Coast Guard and the U.S. Navy.

AMO operates maritime patrol aircraft from Corpus Christi, Texas, and Jacksonville, Florida, to conduct long-range aerial patrols and surveillance missions along the U.S. borders and in drug transit zones in Central and South America, according to CBP.

These both appear to stem from a press release that originated in Texas from Customs and Border Protection, presumably the National Air Security Operations Center – Corpus Christi Director Allen Durham.  Apparently the semi-submersible was detected by a CBP P-3.

As far as I can tell, the interdiction, which apparently occurred on November 13, actually happened off Panama.

If and when we ever get self propelled semi-submersibles going directly into the US, it will be a significant event with its possible implications for terrorism, but I don’t think we have any public knowledge of that happening yet.