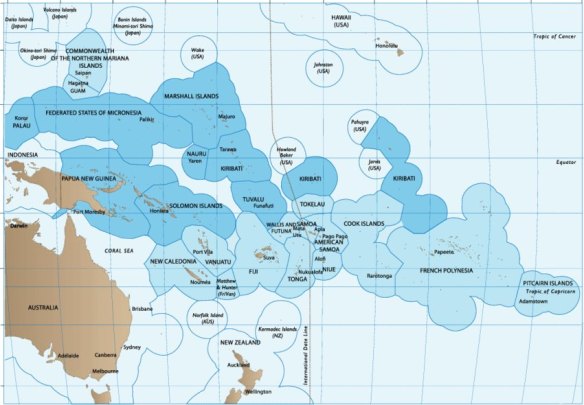 Estimated exclusive economic zones (EEZs) of Pacific Island countries and territories (PICTs). The EEZs of countries that are the Parties to the Nauru Agreement are shown in darker blue. Note that not all EEZs of PICTs have been officially delineated under the United Nations Convention on the Law of the Sea. Source: Patrick Lehodey

The Congressional Research Service (CRS) has published a two page “IN FOCUS” brief on “The Pacific Islands” of Micronesia, Melanesia, and Polynesia. Like all my links to CRS reports, this link will always take you to the latest version. It has already been updated at least once, 17 August, 2022.

Given the increased Coast Guard activity in the region, the report may provide useful background. The topics discussed are: 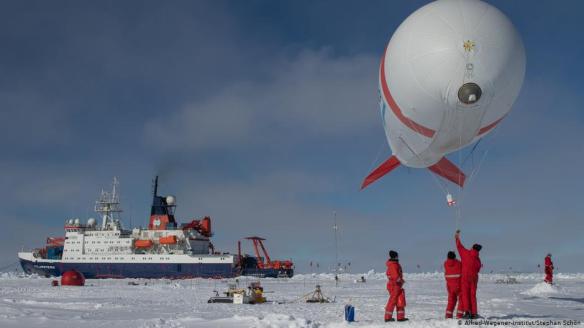 As you may know, there is currently an expedition underway utilizing the German Icebreaker Polarstern to winter over in the Arctic, drifting with the ice. A German friend and blogger, Sven, pointed me to a 19 Sept 2019 German language interview that provides background on the purpose of the expedition and how it was to be conducted. The original article has more pictures and links to additional information. Using Google Translate I have provided a rough English translation below. Hopefully Deutsche Welle will forgive me.

MOSAiC: Great Arctic Expedition Launches
For a year, the research vessel Polarstern will drift frozen through the Arctic Ocean. Researchers want to better understand the influence of the Arctic on the climate, says tour manager Christian Haas in the DW interview.

Deutsche Welle: On 20 September, a large-scale expedition of the Alfred Wegener Institute will take off with the research vessel Polarstern to the Arctic. What is it going to be about?
Christian Haas: On the expedition, we want to better understand the processes and energy flows between the air, the ocean and the ice. For this purpose, we will be freezing in the Arctic for a whole year with our research icebreaker Polarstern.
The processes and conditions there change greatly over the course of the seasons. In winter, we examine the factors that affect the freezing and growing of the ice. In the summer, the situation reverses. Then the ice melts and the ice sheet breaks open to form ice floes.
As the ice is several years old, it is necessary to know the interplay between winter freezing and summer melting in order to be able to assess whether the ice is getting thicker or thinner.

The polar star will drift through the Arctic Ocean with the ice. How exactly does it work?
The sea ice of the Arctic becomes only a few meters thick. Because it is so thin, it can easily break and be driven away by winds and currents, so it is constantly moving. We use this movement, the so-called ice drift, to drift from Siberia over the North Pole to Greenland.
It also has a crucial advantage to drive with the same ice, because we can only judge how the ice is exposed to all the external influences and changes.

There have already been some expeditions to the Arctic. What makes MOSAiC so special?
The special thing about MOSAiC is that we are really there over the course of a year, i.e. throughout the freezing and melting season, and we can observe the processes in all their diversity. We are also a huge team of researchers from 19 nations. A total of 300 scientists are involved.
But everyone will only be on board for two months. We take turns and travel with Russian icebreakers to the POLARSTERN and away again. There are a total of six sections of the journey, each with 50 scientists on board. I myself will be there from December to February.

And what will be your task on the ground?
I am the tour leader of the expedition for my journey section. That means I take overall responsibility for the whole company during the two months. Our group deals with the properties of ice, with a focus on ice ceiling measurement.
In order to measure the thickness of the ice, it was necessary to drill holes earlier, which is very complex. We have developed a new procedure at the AWI. Using electromagnetic probes, we can measure the conductivity of the subsurface.
The ice is solid and therefore a bad electrical conductor while the salt water underneath is very good. This allows us to determine the distance between ice and water, i.e. the thickness of the ice, very precisely.
We will then compare the data with satellites, in particular the European CryoSat, which has been launched specifically for ice ceiling measurement. So we can then observe how the ice grows and becomes thinner.

You spoke of a variety of processes being investigated. What are the other groups exploring?
The main aim is to investigate why the thickness of the ice changes. This depends on a huge number of influences, such as the air temperature and humidity of the winds, solar radiation and also how much heat gets from the water to the ice.
All these factors are measured simultaneously in high temporal resolution – all with the question “How does this affect the thickness of the ice?”

Working at home and in the Arctic is certainly different. They have been there many times. What are the working conditions there?
Of course, there are risks that we do not have. You can get frostbite, break into the water or meet polar bears. I’ve met many polar bears. Everyone who moves in the Arctic carries a gun with them.
However, the Polarstern has never fired a shot at a polar bear. Because they are primarily curious and come because of it. Since they are also very anxious, they can easily be expelled with noise. So these are not risks that pose great dangers if you behave correctly.
The far bigger challenges are more in the extreme situation of being so far away from home, for so long. Especially in winter we work in complete darkness. In addition, we are constantly there with many other people, there is no more privacy.
In addition, all the means of communication that we are used to here, i.e. the Internet, satellite communications and telephone, are only possible to a very limited extent. Because there is only one satellite communication system that still works north of 75 degrees North.

Nevertheless, this expedition is very important – keyword: climate change?
The whole world is worried about climate change. The Arctic is the hotspot, or the epicenter of global climate change. Because in the Arctic we are seeing the most significant climate changes.
These are also particularly well observed due to the retreat of the ice. The Arctic is warming faster than the rest of the world. That’s why you have to go to the Arctic to understand what’s happening there and to be able to make predictions for the world.
And how is sea ice doing at the moment?
The area of arctic ice in summer has decreased by more than 50 percent in the last 40 years. Now, in September, the ice retreats most every year before expanding again in autumn and winter.
This year we are seeing the second smallest sea ice extent ever observed in the Arctic. From this point of view, it is good that MOSAiC is starting this year. This means that the initial conditions are among the most extreme and we are just looking at how the Arctic has changed in recent years and what the state of the ‘new Arctic’ is.

Some how I missed this when it came out. Lots of topics covered.

Thanks to Luke for bringing this to my attention.

We have a statement for the record (pdf) from James R. Clapper, Director of National Intelligence, dated February 9, 2016. Perhaps it is the nature of the beast, but there is no good news, and much that is bad.

Smuggling of every type appears to be on the rise including drugs and people. We can expect an increase in illegal immigration as a result of violence, poverty, and disorder in Latin America and particularly Cuba and Central America.

There are also regional assessments including one on Latin America and the Caribbean (pp 28-29).

There is no regional assessment for the US. In terms of direct terrorist threats to the US, while there is a recognition of an aspiration on the part of various groups to attack the US, but the emphasis seems to be on “homegrown violent extremists” (HVEs) and there is nothing about the possibility of a maritime attack on the US. Is that because none exist?

The President spoke at the graduation ceremony for the Coast Guard Academy class of 2015. You can read the text of the speech here.